How slower metabolism could eliminate developmental genetic diseases and even cancer — CBC Scholar Awards to Justin Cassidy and Nicolás Peláez, NU, contribute to the recent publication in Cell

Fascinating research results have just been published in the journal Cell, titled “Repressive Gene Regulation Synchronizes Development with Cellular Metabolism.” Using experimental model organism, Drosophila melanogaster, four past CBC awardees and their colleagues demonstrated that slowing the fruit fly metabolism by 50%, allows normal, albeit slower growth, but prevents many genetic mutations that would otherwise manifest themselves in the adult flies. In addition, microRNAs, which play a key role in regulating gene expression in normal organisms, are not produced in the metabolism-slowed animals, suggesting they are dispensable under such conditions. The current underlying thinking is that slowed growth of the organism allows more time for correcting genetic mutations and thus avoids development of the encoded defects. Implications for slowing down cancer growth and developing new cancer therapeutics are also discussed.

The four NU scientists that participated in the published research are professors Luís Amaral and Richard Carthew, and former graduate students Justin Cassidy and Nicolás Peláez. Cassidy, who is first author on the study, and Peláez (one of the co-authors) were CBC Scholars, Class of 2010 and 2011, respectively. Their CBC Scholar Awards are acknowledged for partially contributing to the published study. Amaral (co-author) and Carthew (senior author) are also past CBC awardees, CBC symposia speakers (Carthew) and board members (Amaral; see below for details). The CBC congratulates all authors on the Cell paper!

Finding appears to be universal across hundreds of tested mutations 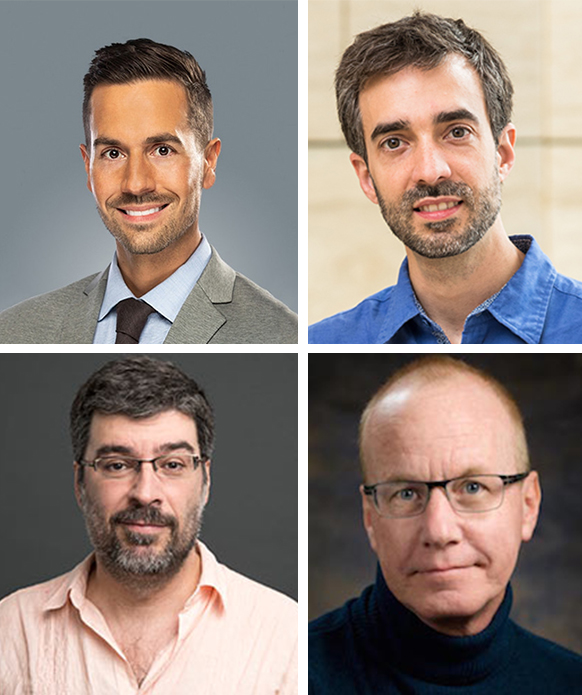 Just by slowing their metabolism, mutant fruit flies can go from zero to hero.

“This upends the paradigm of everything we know about development,” added Northwestern’s Luís Amaral, who led the computational research. “We have always thought that if you ‘break’ some genes, there will be serious developmental consequences. It turns out that’s not true for some genes — as long as you also slow the metabolism of the growing organism.”

The research could explain a number of factors, such as why factory-farmed chickens that are bred for hyper growth have more developmental problems or why caloric restriction is linked to longevity.

In perhaps the study’s most striking discovery, researchers found that fruit flies — with slowed metabolic rates — could live without any microRNAs, which was previously thought impossible. Found in all plant and animal species, microRNAs play a key role in regulating gene expression. To put it simply: microRNAs control development, physiology and behavior.

“We know from 20 years of research, microRNAs are essential for life. If you didn’t have any microRNAs, you would be dead. Simple as that,” Carthew said. “In our study, we slowed down the metabolism of fruit flies that were not making any microRNAs whatsoever. They survived, they grew and they became normal adults.

“Our result concludes that this entire family of gene regulators is not essential,” he added. “All you have to do is slow metabolism by roughly 50%.” 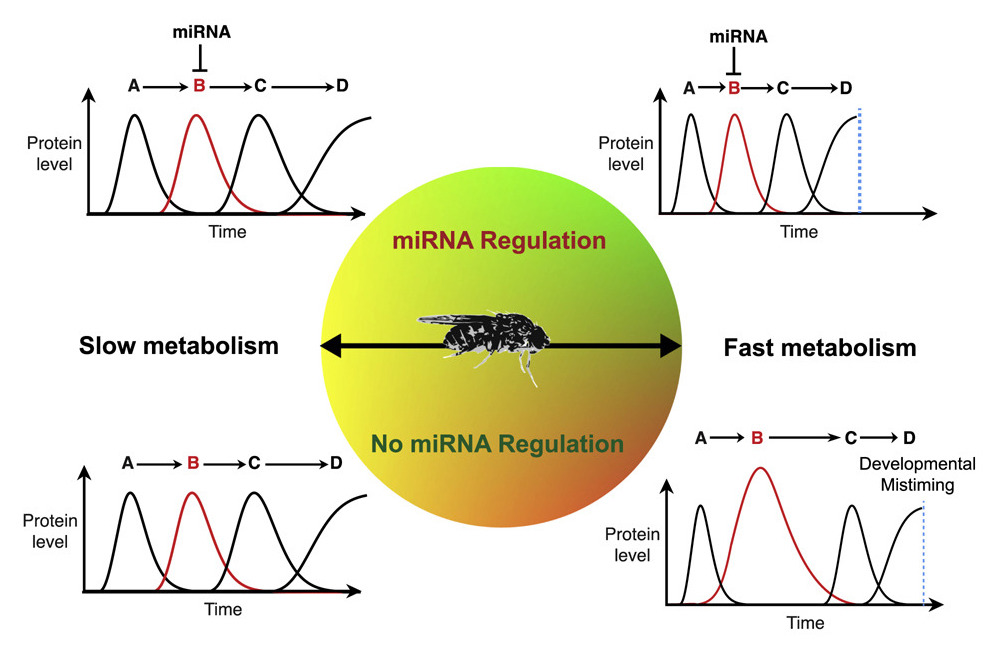 Nobel laureate Thomas Hunt Morgan first noted the connection between diet and genetic mutations in 1915. When he raised mutant fruit flies on limited amounts of poor food, Morgan noticed that some mutations were never expressed.

“He thought it was interesting, but he had no explanation,” Carthew said.

Carthew and Amaral now believe the answer is feedback control. Common in biology, engineering, economics and many other fields, feedback control enables complex systems to adjust performance in order to meet a desired response. After completing hundreds of experiments across several years, the Northwestern duo believes that a slower metabolism gives the animals’ systems time to correct errors.

“When you look at all the different proteins and genes that interact within a cell, you can get overwhelmed by all the components and the interactions among them,” Amaral said. “If you are growing fast and something goes wrong, it can be catastrophic. You need these complex networks because they increase redundancy to prevent catastrophe.

“But if you are growing slowly, you might not need such a complex system,” he said. “You have more time to adjust to mistakes and react to changes.”

In other words, if you give the system more time, it will eventually get to where it needs to be. Carthew, who is also a member of the Robert H. Lurie Comprehensive Cancer Center of Northwestern University, said this finding could eventually be applied to cancer.

“Tumors are extremely metabolically active,” he said. “Tumors soak up an enormous amount of energy, which is why cancer patients are often exhausted. We could potentially think about ways to target the metabolism of cancer cells. Maybe by slowing their metabolic rate, we could stop the oncogenic mutations in tumor cells from expressing their cancer phenotype.”

Northwestern Ph.D. students Justin J. Cassidy and Sebastian M. Bernasek are the paper’s co-first authors, and Nicolás Peláez is one of the co-authors.

June 5, 2018
▸ NSF-Simons Center for Quantitative Biology at Northwestern to be led by researchers with ties to CBC, Richard Carthew and William Kath