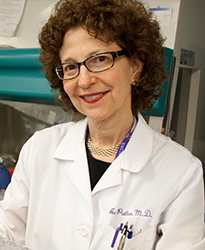 Congratulations to Amy Paller and Duncan Hieu M. Dam, NU, for their recent publication in Materials Chemistry Frontiers, titled “Folic acid functionalized hollow nanoparticles for selective photodynamic therapy of cutaneous squamous cell carcinoma.” The publication was partially funded by a CBC Postdoctoral Research Award to Dam (2015). The team has devised a nanocarriers-based method, where nanoparticles, coupled to folic acid on the surface, reliably cross the epidermal barrier and become taken up by cutaneous squamous cell carcinoma (SCC) cells, which express high levels of the folic acid receptor. Internalized nanoparticles, pre-loaded with photosensitive porphyrins, can then be locally activated with a laser causing contained damage and apoptosis of the targeted SCC cells. The method will need further development and optimization, specifically to avoid unwanted photo-damage, but it is certainly promising as a potential solo or augmenting treatment of non-melanoma skin cancers, which currently are treated preferentially by surgery. 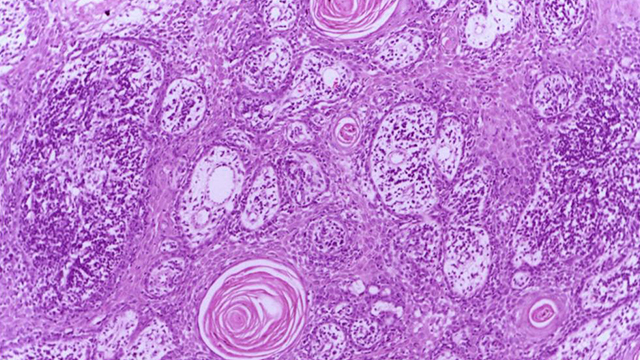 Intervention for non-melanoma skin cancer (NMSC) remains largely surgical, and development of an effective, tissue-salvaging, less invasive therapy is a significant unmet need. Photodynamic therapy is a non-invasive approach for NMSC, but depends on the uptake of protoporphyrin IX (PphIX), a naturally-occurring photosensitizer. However, the bioavailability of PphIX is low and improved delivery is needed. Nanoscale carriers can facilitate therapeutic delivery, including through the epidermal barrier. We have developed ultra-small hollow silica nanocarriers (HSdots) (~10 nm) packed with zinc phthalocyanine (ZnPC), a porphyrin that can be excited by near infrared light (671 nm laser). The nanocarrier has demonstrated the ability to deliver to the epidermis of human intact skin. To provide selective capability of ZnPC-loaded HSdots to cutaneous squamous cell carcinoma (SCC) regions, we conjugated folic acid on the surface of HSdots to target the folic acid (FA) receptor, which we found to be more highly expressed in human cutaneous and head/neck SCC lines (A431, SCC12, CAL27) and SCC tissues than in normal human epidermal keratinocytes (NHEKs) and normal skin, respectively. As shown by inductively coupled plasma- optical emission spectrometry, uptake of ZnPC-loaded FA-HSdots in SCC cells after 48 hours was higher than in NHEKs (4- to 5-fold more Si and 6- to 7-fold more Zn). Treatment with the 1-4 mg/mL ZnPC-loaded FA-HSdots (0.01-0.04 mg/ml ZnPC) led to concentration-dependent toxicity of SCCs after exposure to 671-nm laser for 2 mins. ZnPC-loaded FA-HSdots (4 mg/mL) led to >90% SCC death after one laser exposure, accompanied by a 2-3-fold increase in caspase 3 expression and increased nuclear double-stranded DNA breaks, suggesting apoptosis. No toxicity was observed in NHEKs or in SCCs treated with only laser or only the ZnPC-loaded FA-HSdots. Treatment with laser and ZnPC-HSdots without FA receptor targeting led to toxicity in NHEKs that was indistinguishable from that in SCCs, suggesting the importance of FA to selectively target SCCs. Nanocarriers are a promising tool to traverse the epidermal barrier, allowing topical delivery of ZnPC-loaded FA-HSdots and ZnPC/chemotherapy for skin cancer.

December 11, 2017
▸ Understanding skin in health and disease at the center of interest of many CBC awardees at NU