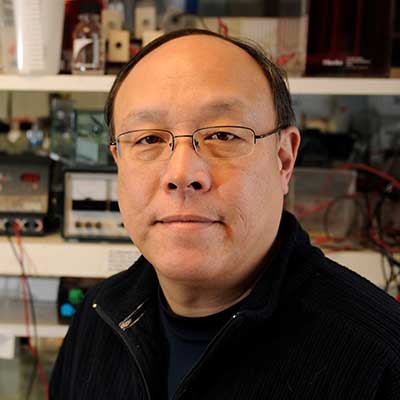 Congratulations to Eugene Chang, UChicago, recently featured in Crain’s Chicago Business! The article, written by Jackie Bender, discusses Chang’s research on novel compounds that display fungicidal properties with strong selectivity towards the pathogenic fungi, while sparing benign species. As the new compounds are derived from molecules naturally occurring in the body, they promise to carry little, if any, toxicity. The molecules are being further developed towards potential therapeutics at AVnovum, a company spun out of UChicago in 2017 and founded and led by Chang. Chang is also director of the UChicago’s Microbiome Program.

In 2015, Chang received a CBC Catalyst Award for a microbiome-related project, “Role of Gut Microbiota in Determining Drug Efficacy and Toxicity.”

A game-changer for those with weakened immune systems

This gut-health expert is developing a new class of antimicrobials.

Five years ago, Dr. Eugene Chang made a discovery that could have life-altering implications for people with weakened immune systems.

The director of the University of Chicago’s Microbiome Medicine Program studied a naturally occurring molecule in the human body that helps regulate metabolism. He discovered that this molecule also has antimicrobial properties and the ability to do what antifungal medications do: kill harmful fungi. Unlike antifungals, it can do this without harming the good fungi needed for health. Chang, 67, has modified and improved upon the structure of these molecules, creating nine peptides with similar properties and superior efficacy.

“We’re sciencing the heck out of these compounds,” says Chang, who was named a “Hero of Medicine” by Halo, an online platform that connects scientists from academia with industry partners for research collaborations, in an awards ceremony last year.

The AVpeptides have become the foundation of AVnovum, a company spun out of U of C and founded in spring 2017. Chang, AVnovum’s chief medical officer, says the compounds are still experimental, but he expects clinical trials in humans to begin in three to four years.

AVpeptides could be a game-changer for the part of the population most prone to fungal infections, such as people living with chronic conditions like diabetes or undergoing treatments like chemotherapy. It’s common for these patients to develop painful and unpleasant fungal infections—the most common of which are lesions and mouth sores. More seriously, if a fungus invades the wall of the gut and enters the bloodstream, it can even cause death.

These types of fungi are easier to treat before an infection develops, but the current standard of care often necessitates reactive treatment. Similar to the way antibiotics treat bacterial infections, the drugs that treat problematic fungi also cause collateral damage, so they are used sparingly. “Most physicians don’t like to use them until the complication actually happens,” Chang says. “They don’t use them for maintenance.” Prolonged use of antifungals can cause liver damage.

Because AVpeptides target only the harmful fungi, they have the potential to be used preventively. Chang also expects they will be safer and less toxic than standard medications because they are similar to a molecule the body makes naturally.

“If there are alternative approaches we can use, it’s going to be critical for medicine in the 21st century,” says Steve Lehmann, assistant director of the George Shultz Innovation Fund at the University of Chicago, which awarded the company $150,000 in 2017 to fund research. “I hope it’s really going to affect the quality of life of people who are immunocompromised,” Lehmann says. Chang’s team of five plans to raise a seed round of funding this year.

March 1, 2019
▸ From bench to market
CBC community members from UChicago contribute to the commercialization pipeline at many different entry points. CBC poised to help.

May 24, 2018
▸ From gut to blood to cancer—CBC scientists, Lucy Godley and Eugene Chang, UChicago, provide new insights into the mechanism of TET2-linked leukemia development

April 26, 2018
▸ On leanness and obesity-promoting microbiota, and on positive feedback loops — Eugene Chang, UChicago researcher and CBC past awardee

March 6, 2018
▸ A CBC awardee Eugene Chang, UChicago, contributes his expertise into a discussion about the causes and treatment of IBD and other gut imbalances

September 27, 2017
▸ Antibiotics weaken signs of Alzheimer’s disease in mice after just one week of treatment