CBC three-time Awardee Scott Franzblau, UIC, to lead a team to develop new anti-TB drugs as part of a multi-institutional project funded by a $28.4 million grant from NIH

Congratulations to UIC and its team—Sanghyun Cho, Scott Franzblau and Guido Pauli. They’re part of a $28.4 million NIH multi-institutional grant supporting the TB Alliance. Up to $9 million is set to go to the UIC Institute for Tuberculosis Research supporting studies of natural compounds with anti-TB properties as well as evaluating compounds developed by other participating institutions.

With TB on the rise, and with it the resistance to currently available anti-TB drugs, physicians frequently prescribe several anti-TB therapeutics to be taken together over six months period, further facilitating the development of antibiotic resistance. Hence, the need for new, faster-acting and more effective anti-TB agents is a serious one.

Franzblau received three CBC Awards in the past, all for the projects dedicated to studying M. tuberculosis and antibiotic resistance. In 2009, he received his first Catalyst Award, and in 2016, his second. In 2016, Franzblau and his team received an HTS Award for the project: “High-throughput Screening and Validation of Inhibitors against M. tuberculosis Class II FBPase.” The CBC is proud to have supported Franzblau’s research over the years and wishes him and all the participants in this NIH-sponsored research many successes in conquering this dreadful disease! 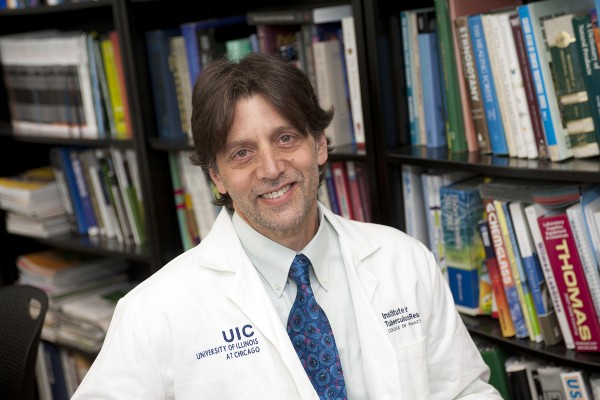 The University of Illinois at Chicago will work with TB Alliance to help find new drug treatments for tuberculosis, a bacterial infection considered to be one of the leading causes of death worldwide. TB Alliance is a nonprofit organization dedicated to the discovery, development and delivery of new TB cures.

The goal is to produce two new clinical-stage drug candidates for treating tuberculosis, which is becoming increasingly resistant to available antibiotics.

The five-year research project will receive up to $28.4 million in funding through the National Institute of Allergy and Infectious Diseases-supported Centers of Excellence for Translational Research program (U19AI142735-01). UIC will be one of three key partners to TB Alliance, the primary recipient of the grant.

As part of the project, UIC and its Institute for Tuberculosis Research will receive up to $9 million in funding to investigate promising natural compounds and their effect against TB and to evaluate the treatment potential of compounds developed by researchers from Harvard University and Johns Hopkins University, the other key partners on the project.

UIC, Harvard and Johns Hopkins will investigate compounds that work on different molecular targets that are essential for the survival of the causative agent of TB, Mycobacterium tuberculosis. UIC will focus on compounds that target the ClpC1 protein, which assists in degrading proteins within the bacterium.

“Our institute has been building specialized laboratory assays for investigating TB for many years,” said Franzblau, who is also director of the Institute for Tuberculosis Research, which is part of UIC’s College of Pharmacy. “These assays will allow us to evaluate potential drug compounds against M. tuberculosis in both in vitro and in vivo environments, and the combined efforts of all the partner institutions involved in this project will increase the chances of finding new drug candidates, which we need urgently.”

Among the challenges of treating tuberculosis is the bacterium’s ability to develop resistance to current drugs. Treatment can include all four of the first-line drugs, which are taken over the course of six months, Franzblau said.

“Because TB treatment can take a long time, it is common for patients to become non-adherent, which also increases their likelihood of developing resistance to the medication,” Franzblau said. “Ideally, we need drugs that can eradicate the infection in several weeks.”

Source:
Adapted (with modifications) from UIC today, by Jacqueline Carey, published on June 19, 2019.