TWO high-impact publications from the Krishnan lab at UChicago, in Nature Nanotechnology and in Nature Methods, attributed to a recent CBC Catalyst Award!

Congratulations to Yamuna Krishnan and her team at UChicago for two recent publications in in Nature Nanotechnology and in Nature Methods! The papers describe a novel methodology — a DNA nanomachine — that allows the researchers to microscopically ‘observe’ the intracellular behavior of lysosomes in vivo. Moreover, the authors report that there are at least two distinct subsets of lysosomes; a finding that might become of a significance in deciphering the role the malfunctioning lysosomes play in several human conditions, including neurodegenerative diseases. Both publications have been partially funded by a CBC Catalyst Award (2018). Krishnan’s work is a prime example of a co-dependance between basic and biomedical research — the CBC is committed to recognize and support this type of foundational science as well as the translational applications that follow.

Scientists build flashlights to peek inside the ‘garbage disposal’ of cells

UChicago researchers use DNA nanomachines to discover subgroups of lysosomes 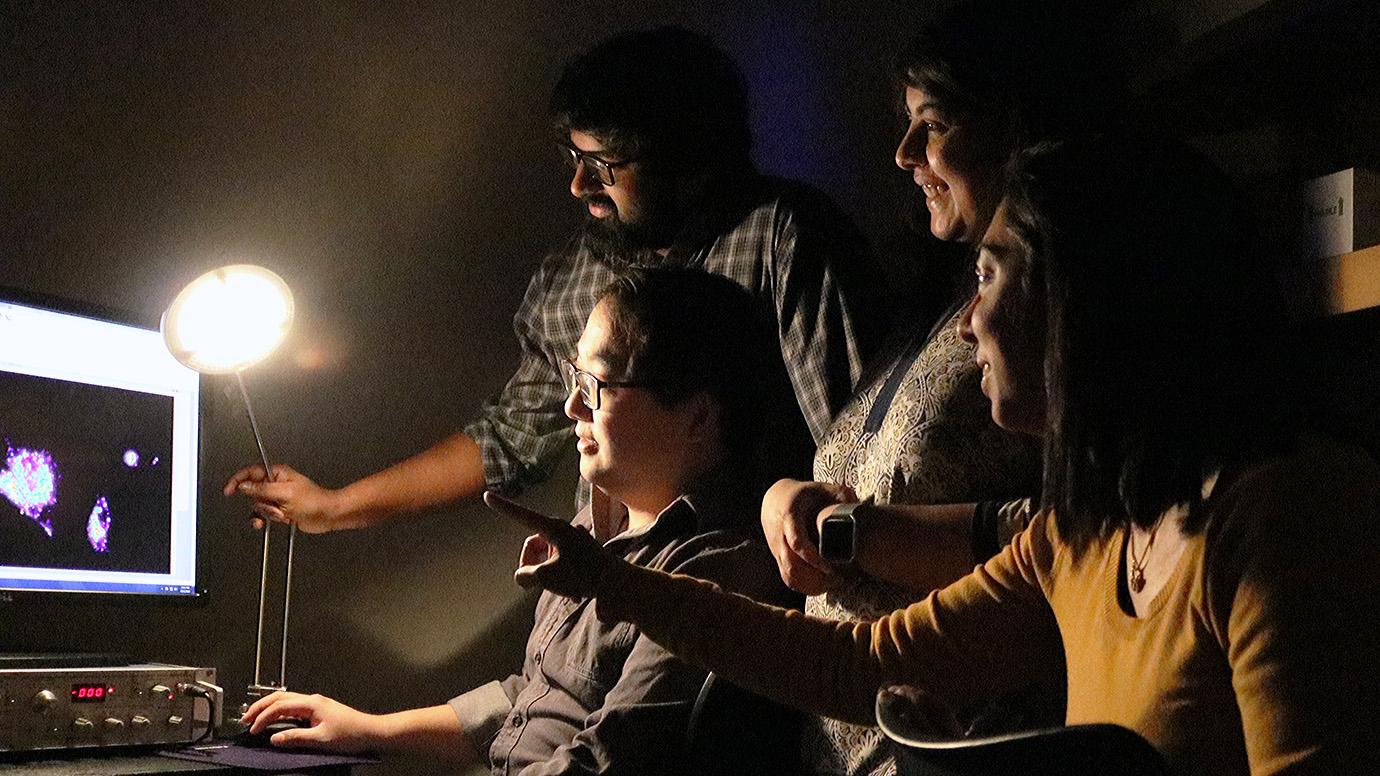 The story of the lysosome is a classic smear campaign. Once dismissed as the garbage disposal of the cell—it does break down unneeded cell debris—it is now valued by scientists who realized all that dirty work also controls survival, metabolism, longevity and even neurodegenerative diseases.

An innovative tool invented by University of Chicago scientists will give us a new window into the lysosome’s inner workings. Two studies led by Professor of Chemistry Yamuna Krishnan built tiny machines to tease out clues about lysosomes, including whether they actually come in two or more related types—which may help us understand lysosome-related disorders.

“Both scientists studying the cell and doctors treating patients for lysosome disorders need better diagnostics, so this is a very good step forward,” said graduate student Kasturi Chakraborty, the co-first author for both papers.

Scientists want the ability to watch live footage of what’s going on in a cell, but its inner workings are hard to catch in action. It’s tiny, and what’s more, it’s a harsh environment; lysosomes in particular are highly acidic—not good for cameras. “Most sensors will just stop functioning if the acidity is that high,” Chakraborty said.

To address this issue, Krishnan’s group uses DNA as their building material to make flashlights and sensors to peer inside. It’s already adapted to life in a cell, and it comes in a handy puzzle-piece format, perfect for building tiny nano-machines that catalogue life inside a living cell.

They designed the nanomachines to measure both pH and the particular ions floating around the lysosome—either calcium or chloride—that are the basis for how lysosomes communicate and carry out their tasks. Through them, scientists can see how lysosomes work—and tease out what’s going on when they’re not working, in certain diseases or hereditary conditions.

One of the most interesting things they found using the new probes was evidence there are actually at least two different kinds of lysosomes.

Scientists had suspected lysosomes came in distinct types with different functions, but it had never been confirmed, Chakraborty said. They don’t yet know exactly how the two kinds of lysosomes differ in function, but they do know one kind is missing in people with a certain lysosome disorder called Niemann-Pick disease.

The key was designing a sensor that could measure two kinds of ions simultaneously. “You absolutely need two independent chemical signatures to discriminate between lysosomes,” Chakraborty said.

“It’s interesting because lysosomes are well-recognized as a multifunctional organelle, and so [until] now we considered that it was a single type of lysosome performing multiple functions,” said Krishnan, corresponding author for both studies. “Our studies reveal that there might actually be different sub-types of lysosomes designated for different functions.”

Postdoctoral researcher KaHo Leung was a co-first author for one paper and Nagarjun Narayanaswamy [for] the other. Other co-authors were graduate students Anand Saminathan and John Devany and undergraduate student Elizabeth Zeichner.

Adapted (with modifications) from the UChicago News by Louise Lerner, published on December 19, 2018.

Publications attributed to the CBC funding*: