We were premature in closing our series on neuroprosthetics with the article #3… Today, we are pleased to report that the pioneering work of the CBC Catalyst Awardee, Sliman Bensmaia, UChicago has been highlighted in The New York Times! To quote from the article: “Plans are now in the works to expand human trials at the University of Pittsburgh, Johns Hopkins University and the University of Chicago. The biggest challenge now? Making the brain implant wireless and upgrading it so that it doesn’t wear out after five years.” Congratulations again, Sliman, on advancing your research to the stage when it can benefit patients and excited to see one of the CBC schools – UChicago, become involved in human trials! Bensmaia is CBC past Catalyst Awardee (see below for the details).

Please note that, due to the original article’s length, only the CBC-relevant excerpt is posted below. To read the entire article (highly recommended) please CLICK HERE. 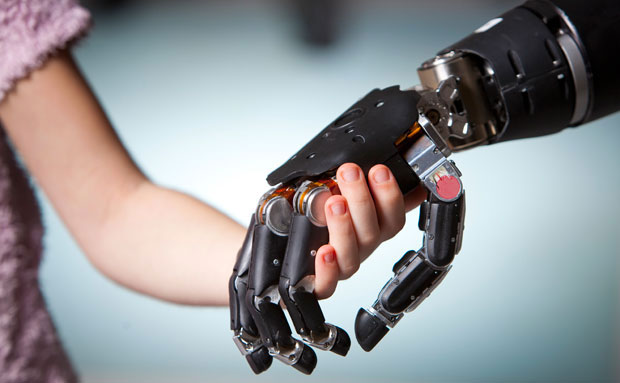 (…) In the world of prosthetics, scientists have found a way for tetraplegics — those paralyzed from the neck down — to feel touch by electrically stimulating parts of the brain. Paralysis can mean the loss of both control and feeling in affected areas, and while prosthetics can return motor function, sensing requires treatment of the nervous system itself.

Initially, the challenge seemed daunting, considering the brain contains 100 billion neurons, and matching up the neurons that control sensory nerves with the prosthetic hands and arms was tough, said Sliman Bensmaia, an associate professor in the department of organismal biology and anatomy at the University of Chicago, who was part of the research team. But after surgically placing an electrode implant into the brain, the team was able to electrically stimulate the portions of the brain that controlled sensation, allowing the patient to feel the size, shape and texture of objects and to tell when a finger was touched.

Plans are now in the works to expand human trials at the University of Pittsburgh, Johns Hopkins University and the University of Chicago. The biggest challenge now? Making the brain implant wireless and upgrading it so that it doesn’t wear out after five years.

“You can’t be having brain surgery every few years,” Dr. Bensmaia said. “We need an array or implant technology that lasts a lifetime.”

Dr. Bensmaia said the brain implant technology could someday have far-reaching applications, such as improving memory or retrieving information faster. (…)

Source:
Adapted (with modifications) from the The New York Times, by Janet Morrissey, published on February 14, 2019.