New Technique Switches Key Biomolecules “on” and “off”

In 2012, the team of Andrei Karginov (UIC) and Michael Glotzer (UChicago) received a CBC Catalyst Award for the project: An “And-Gate” for Optogenetic Control of Protein Kinases. Karginov is a senior author on a recent report published in the Proceedings of the National Academy of Sciences, “Mimicking transient activation of protein kinases in living cells.” The article describes a novel strategy enabling transient and thus physiologically-relevant activation of kinases in living cells and promises to become useful in targeted regulation of individual signaling pathways. 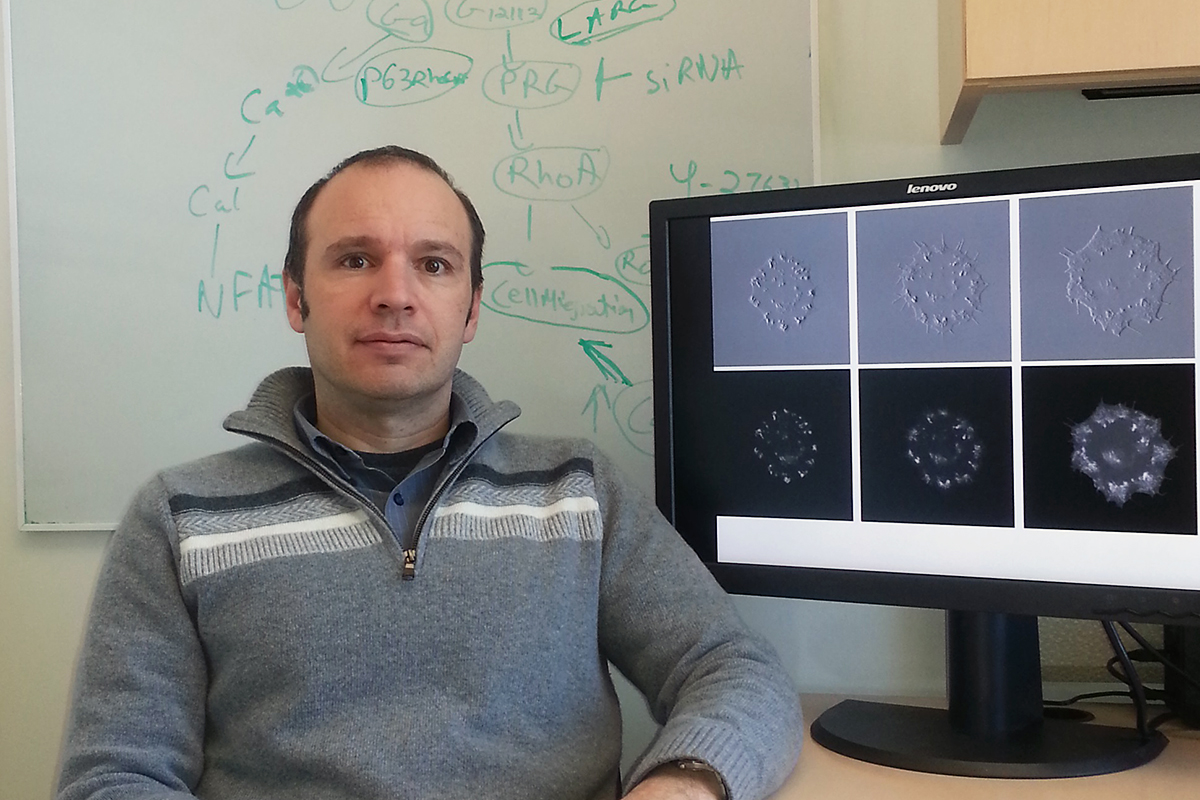 Andrei Karginov, Assistant Professor of Pharmacology in the UIC College of Medicine.

A new technique that will allow scientists to determine the effects of turning on and off a set of molecules involved in almost every cellular pathway, determine their downstream effects, and uncover new drug targets has been developed by researchers at the University of Illinois at Chicago.

The finding is reported in the Proceedings of the National Academy of Sciences.

Protein kinases are enzymes involved in almost every biological process. These molecules perform a single action – they transfer phosphate from the energy molecule ATP to other enzymes and proteins. The process is a key mechanism of regulatory control and allows cells to perform all of their functions.

Until now, it was difficult to study cellular processes triggered by specific kinases that turn on only briefly, says Andrei Karginov, assistant professor of pharmacology in the UIC College of Medicine.

“Previously, we had the ability to artificially turn on a kinase, but we didn’t know how to turn it off,” Karginov said. “So what we could see was only the result of that kinase being on for a long time.”

That approach has proved useful to study the prolonged cancer-causing effects of some kinases, Karginov said.

“But, in living cells, kinases are often turned only for a set period of time, and the duration of this activation often dictates what will happen to the cell,” he said.

“To mimic this transient action we had come up with a new strategy.”

The new procedure allows scientists to turn kinases on, and then off – providing a powerful tool for studying the effects of kinases as they actually work in the body.

The researchers used two protein-engineering techniques to switch on and switch off one kinase, called tyrosine kinase c-Src. They were able to observe a series of structural changes when they turned the enzyme on for various periods of time.

Rac1 activity after turning on (left) and turning off (right) Src kinase in HeLa cells. Warmer colors reflect higher local activity of Rac1. A corresponding video of the “on” and “off” activation process can be accessed on the PNAS website by clicking on the image.

The first wave of changes, where the cell seemed to expand and then contract, was driven by kinase activation and inactivation. Interestingly, a second expansion sometimes occurred after the kinase had been switched off – depending on how long it had been left on.

The experiment demonstrated that even short-term activation of a kinase can have a long-lasting effect on cell behavior, and allowed researchers to identify the molecular mechanism driving these events.

Asrar Malik, Jennifer Klomp, Vincent Huyot, Anne-Marie Ray, and Kerrie Collins of the UIC department of pharmacology are co-authors on the paper.

This research was funded by the National Institutes of Health grants R21CA159179 and T32 HL007829-22, the Chicago Biomedical Consortium and the UIC Center for Clinical and Translational Science grant UL1TR000050.