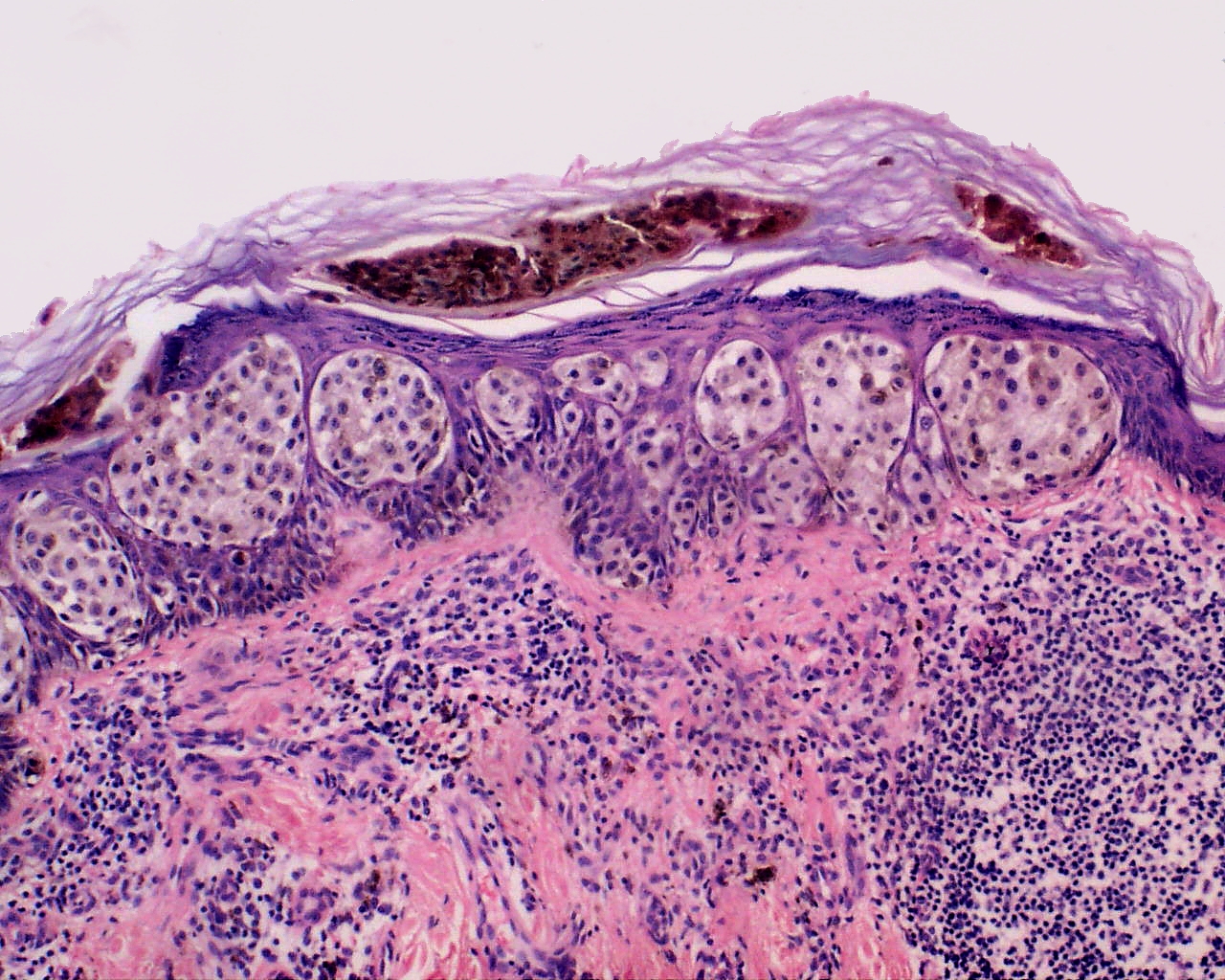 Melanoma — a type of skin cancer that derives from pigmented cells called melanocytes — is primarily caused by DNA damage resulting from the skin exposure to the UV light (sun, tanning). This cancer may also occur on the body areas which are typically protected from the sun, such as mucosal membranes or intestines. It is the most dangerous of skin cancers. If detected early when the disease is localized, and is treated aggressively, the 5 year-survival is 99%. However, the rate falls to 25% in more advanced metastatic melanomas.

In a recent paper, “Distinct Genomic Features in a Retrospective Cohort of Mucosal, Acral and Vulvovaginal Melanomas,” published in the Journal of the American Academy of Dermatology, the authors look into the pathogenesis of sun-protected melanomas. They discovered significant genetic heterogeneity in the cancer samples studies, with mucosal melanomas showing a distinct up-regulation of cell cycle and proliferation genes, in good agreement with the aggressive clinical behavior of this type of melanoma.

Kevin White, currently Chief Scientific Officer of a biotech start-up Tempus Labs, is one of the co-authors on the paper. He was recruited to UChicago in 2006 with help of a generous CBC Resources Fund Award, and was also designated the first CBC Senior Investigator. In addition, he received a CBC Lever Award (2008) for the project: “Chicago Center for Systems Biology (CCSB).” White was an invited speaker at CBC Science Day (2011) and the 4th Annual CBC Symposium (2006) on “Infrastructures for Systems Biology.” He also served on the CBC Proteomics Informatics Scientific Board (2007-2009) and the CBC Spark Council (2008-2011). The CBC is grateful for Kevin’s time and dedication while serving on CBC boards and for his support of the CBC programs and mission.

Publication linked to the CBC funding*:

OBJECTIVE: We investigated the genomic profile of acral, mucosal and vulvovaginal melanomas. We hypothesize that mucosal melanomas, recognized for their uniquely aggressive clinical behavior, have distinct genomic features.

RESULTS: There was significant genetic heterogeneity, particularly in acral melanomas with 36% having BRAF alterations while other melanomas had none (p = 0.0159). Nonzero UV signatures were more frequent in acral melanomas, suggesting greater UV involvement. Mucosal melanomas formed a distinct group with increased expression of cell cycle and proliferation genes. Various targetable aberrations were identified such as AURKA and ERBB2 in mucosal and acral melanomas, respectively.

LIMITATIONS: There was a small sample size.

CONCLUSION: There is significant genetic heterogeneity among sun-protected melanomas. Mucosal melanomas have upregulation in cell cycle and proliferation genes, which may explain their aggressive behavior. Ultraviolet radiation plays some role in a subset of acral but not other melanomas. 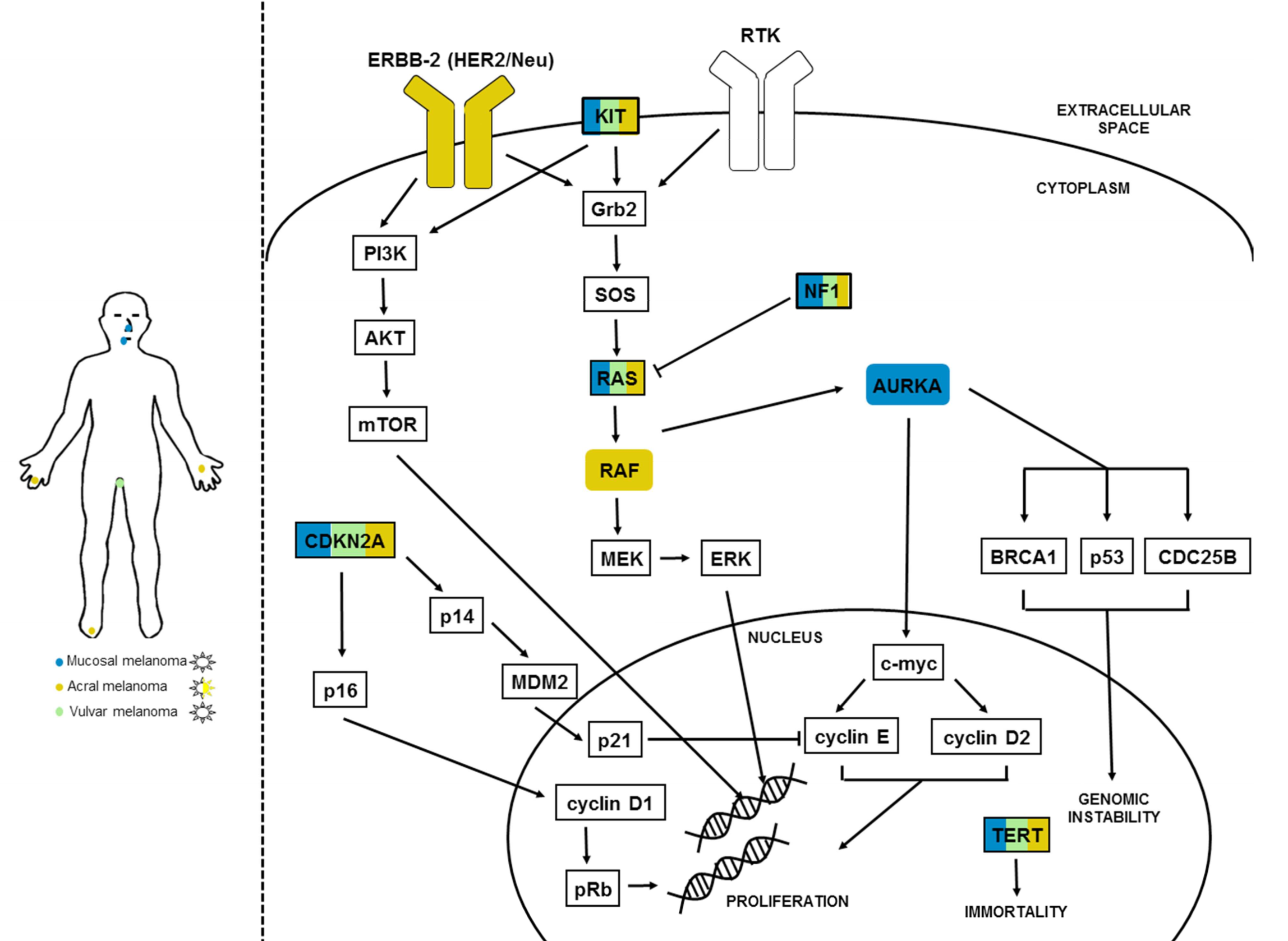