Epithelial cells cover all body surfaces starting with the skin through all other organs. During embryonic development, epithelial cells migrate in a synchronized manner to assure proper body polarity and organ formation. Such synchronized migration of the epithelium is also essential throughout the lifetime, e.g., during wound healing and regenerative processes. Using Drosophila egg chamber formation, Sally Horne-Badovinic, UChicago, has recently demonstrated how two proteins, Sema-5C and Plexin A, direct follicular cell migration during oogenesis and reshape the egg chamber. The mechanism is quite beautiful and relies on the cell-to-cell communication where the cell in front tells the cell behind to follow, and, at the same time, that cell behind repulses the cell in front projecting it forward. The study was recently published in Current Biology. In 2012, Sally was an invited speaker at a CBC Scholars Seminar “Loop Connections” where she spoke abut the Misshapen kinase role in the collective cell migration in Drosophila. In 2016, Sally, and her postdoc, Allison Zajac, also a co-author on the Current Biology paper, received a CBC Postdoctoral Research Award. Congratulations, Sally, Allison and all other authors involved in this elegant study. 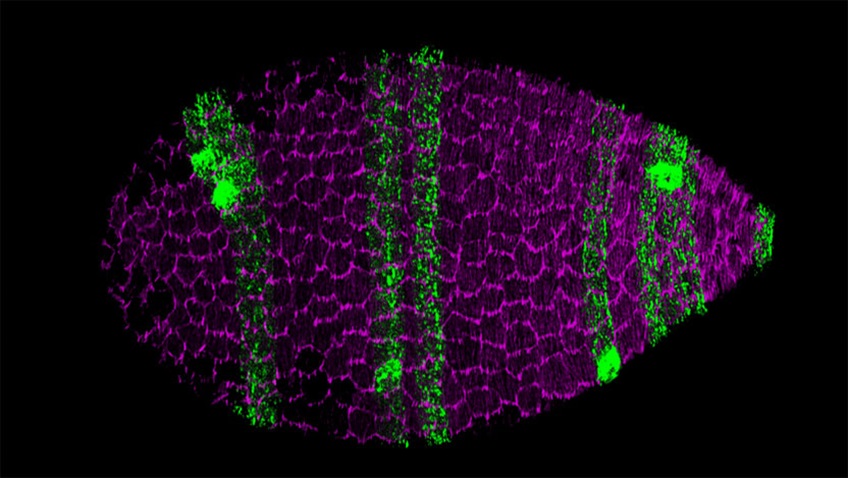 Surface view of a Drosophila egg chamber, the multicellular precursor to the egg. The follicular epithelial cells that form the egg chamber’s outer layer collectively migrate along the extracellular matrix (ECM) that surrounds the organ. This collective migration, in turn, causes the entire egg chamber to rotate within the ECM to create the elongated shape of the egg. (Source: UChicago Medicine Forefront)

Sally Horne-Badovinac, PhD, was studying zebrafish to gain insight into how human intestines develop when she had ascientific epiphany. While staring through a high-powered microscope at a section of the fish’s gut tube—their version of intestines—she happened to glance at some neighboring tissue. She noticed that it had a really interesting shape — an asymmetric pattern of folds — that indicated how it was pushing the gut tube over to the left. Gut tubes in zebrafish and humans acquire bends as they develop. In humans this helps the organ to fit inside the abdomen, and Horne-Badovinac had just discovered a key aspect of that process in zebrafish. She rushed over to a white board and began sketching it out for the other trainees in the lab.

“Over the course of about 15 minutes I had formed an idea about how the entire process worked,” said Horne-Badovinac, who now has her own lab at the University of Chicago, where she’s an associate professor of molecular genetics and cell biology.

“In science they talk about the moment of discovery, right? Where you have this incredible ‘aha’ moment and it all just clicks, and that was the moment for me,” she said. “That’s really when I solidified my decision to become an academic.” 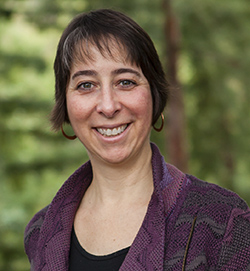 Horne-Badovinac joined the faculty at UChicago just over 10 years ago to continue her scholarship on how the coordinated movement of epithelial cells shape organs. Epithelial cells cover every surface of the body, from the skin to individual organs. The synchronized migration of these cells is essential for embryonic development when the cells move to form organs, during healing when they move to close a wound, and unfortunately during the spread of many cancers. Yet how individual cells signal to one another to coordinate movement is largely unknown.

Horne-Badovinac performs experiments on fruit fly epithelial cells because the model is inexpensive, efficient and translates well to humans. Specifically, she looks at how these cells in the female’s egg chamber move together to alter the developing chamber’s form from a globe shape to more of a football shape.

The egg chamber is an organ-like structure in the ovary with an inner core of nurse cells and one oocyte, all of which are surrounded by a layer of epithelial cells called follicle cells. One side of this layer, known as the basal membrane, butts up against a specialized extracellular matrix known as the basement membrane. During the elongation process, the epithelial cells collectively crawl along this basement membrane, which causes the entire egg chamber to rotate within the matrix — which remains stationary. At the same time the cells secrete new basement membrane proteins that form long linear fibrils that stick into the matrix in the direction of the cells’ migration. These fibrils then act as a kind of “molecular corset” that squeezes the center of the egg chamber and transforms it into an elongated oval.

In a study published February 28th in the journal Current Biology, she, along with Claire Stedden, PhD, who earned her doctorate from UChicago, and other colleagues describe how two key proteins — Sema-5C and Plexin A — help regulate the epithelial follicular cells’ movement. Sema-5C is a transmembrane member of the semaphorin family, which is best known for its function in the nervous system providing “repulsive” signals that steer neural axons away from them and toward other cells with which they need to make synaptic connections.

During nervous system development, semaphorins exist in the environment that the axons are moving through, but Horne-Badovinac found that in the fruit fly egg chamber, Sema-5C was inside each individual epithelial follicular cell. The protein acts like a drill sergeant, telling the cell in front of it to move away from it so that the whole group lines up and moves together.

“The key was to realize that Sema-5C sits at the front of each one of the migrating cells and sends a signal to the cell in front of it to move away (Plexin A sits at the back and receives the signal),” Horne-Badovinac said. “Telling that cell to turn its front end away from where the Sema-5C signal is coming from then allows the cells to both go in the same direction and migrate together as a group.”

Sema-5C and PlexinA are the second protein pair that Horne-Badovinac’s lab has discovered to be integral to the coordinated movement of the epithelial follicular cells. In 2017, they published a paper showing that the protein Lar also sits at the front edge of the cells and another called Fat2 sits at the back edge. As the cells migrate, Fat2 signals to Lar in the cell behind it, which causes that cell to extend its leading edge, tucking under the cell in front of it. In response, Lar signals back to the cell ahead, which retracts its trailing edge. They have also done research on basement membrane formation and on the unique planar polarity of the actin cytoskeleton in the epithelial layer.

The next step, Horne-Badovinac said, will be to try to figure out how all four proteins collaborate to coordinate the cells movement.

“It seems that they are working together in a complex way to mediate communication between the cells,” she said.

Source:
Adapted (with modifications) from the UChicago Medicine Forfront, by Nancy Averett, published on February 28, 2019.