The meeting, which gathered over 150 core facility experts, faculty and researchers, was hosted by Chemistry of Life Processes (CLP) Institute’s Center for Advanced Molecular Imaging (CAMI). An NU core facility, CAMI was founded with a 2009 CBC Spark Award to Thomas O’Halloran (NU), Vinayak Dravid (NU) and Jonathan Silverstein (at UChicago then), for the project “Support for An Innovative Cryo-STEM for Element-Specific Imaging of Cells and Tissue.”

Many topics were covered at the 2019 meeting, ranging from preclinical imaging best practices and research, career opportunities for core facility managers, pitching core research as a new scientific domain, to finally, commercialization. Karen Snapp, Senior Associate Director at the CBC was invited to present an overview of the CBC with emphasis on Phase 2 CBC programing: “Chicago Biomedical Consortium: Supporting Basic Biomedical and Translational Research.” Karen also discussed the close relations that CBC has established over the years with core facilities at the three universities through funding and educational programs, including the CBC’s role in the establishment of the Open Access Initiative which allows researchers from each university to use core facilities at all three institutions without overhead fees.

Multiple PIC organizers and speakers have ties to the CBC. Philip Hockberger, a CBC affiliate, past awardee, and a mastermind behind Open Access Initiative, gave a talk titled “Career Opportunities for Scientists Working in Core Facilities.” Maryellen Giger (UChicago) presented a talk entitled “Artificial Intelligence in medical imaging”, Tom Meade (NU) gave an interesting perspective of his experiences in “Biotech Start Ups: What I wish I knew before….”, and Chad Haney (NU) organized this stimulating event. All three served as reviewers and faculty advisors in the CBC Postdoctoral Research Award program. The CBC is grateful for their service and dedication to the CBC programming. 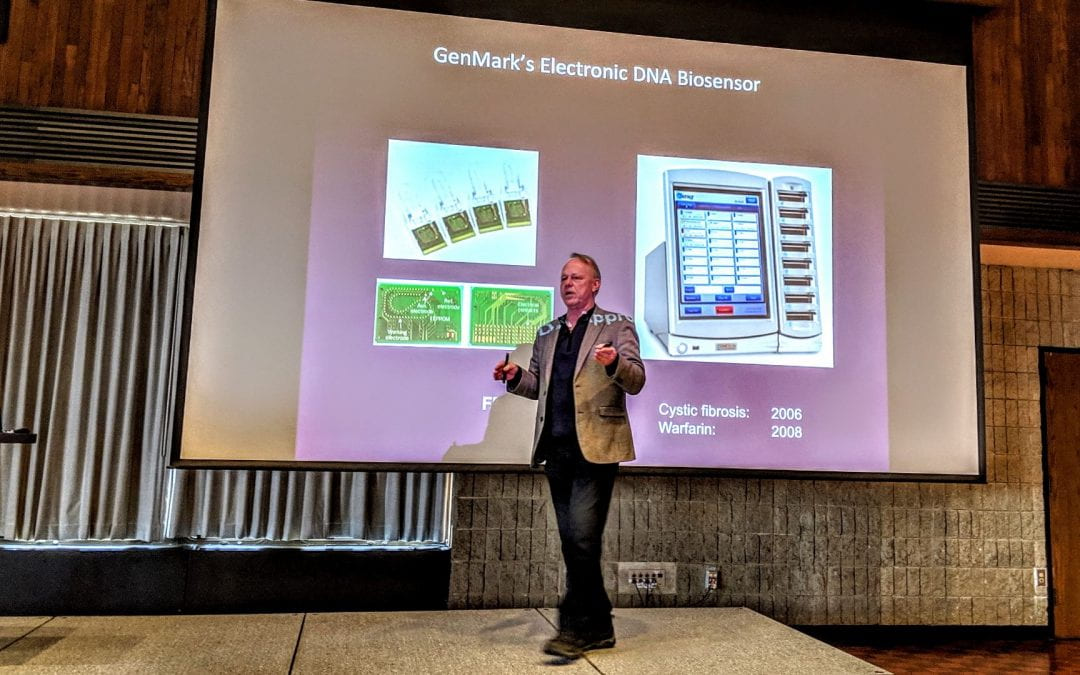 From preclinical imaging best practices and career opportunities for facility managers, to core research and commercialization, the 2019 Pre-clinical Imaging Consortium (PIC) Annual Meeting held at Northwestern University, April 28-30, covered a lot of territory. More than 150 core facility experts, faculty and researchers from across the US attended the conference, hosted by Chemistry of Life Processes Institute’s Center for Advanced Molecular Imaging (CAMI) and sponsored by over twenty companies in partnership with the World Molecular Imaging Society.

“The mission of the PIC,” said the consortium’s co-founder Chad Haney, PhD, managing director, CAMI, “is to create a meeting place where knowledge of operating preclinical imaging facilities is shared openly.” 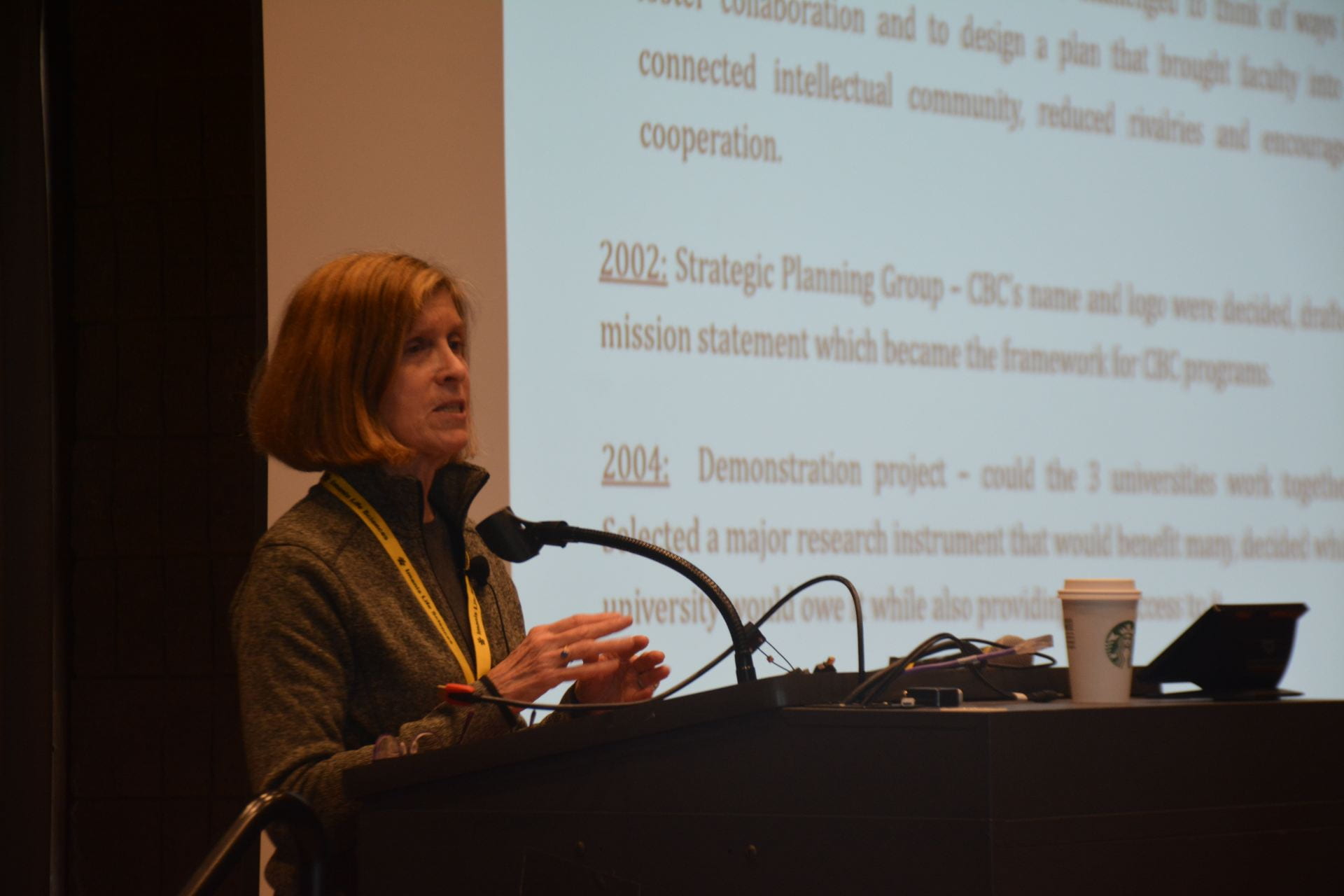 The fifth annual meeting kicked off with a talk by Heather Gray-Edwards, Assistant Professor, University of Massachusetts Medical School who is developing a new gene therapy to correct the enzyme deficiency found in people with Tay-Sachs and Sandhoff disease. Lysosomal storage diseases (there are more than 40 altogether) are often fatal pediatric diseases. A specific protein deficiency that breaks down waste products within the cell is the cause. For several of these diseases, gene therapy clinical trials are ongoing, or about to start, but a way to track therapeutic efficacy is lacking.

Together with the research lab of Thomas Meade, PhD, faculty director of the Chemistry of Life Processes Institute’s Center for Advanced Molecular Imaging, she developed a series of MRI-based contrast agents that non-invasively track the delivery of a therapeutic protein and its activation for the therapeutic effect. Using high field strength MR imaging (7 Tesla) they developed an entirely new way of non-invasively demonstrating that the gene of interest was active. The novel approach enables Gray-Edwards and collaborators from UMMS and Auburn University in Alabama to immediately assess the efficacy of gene therapy treatments. 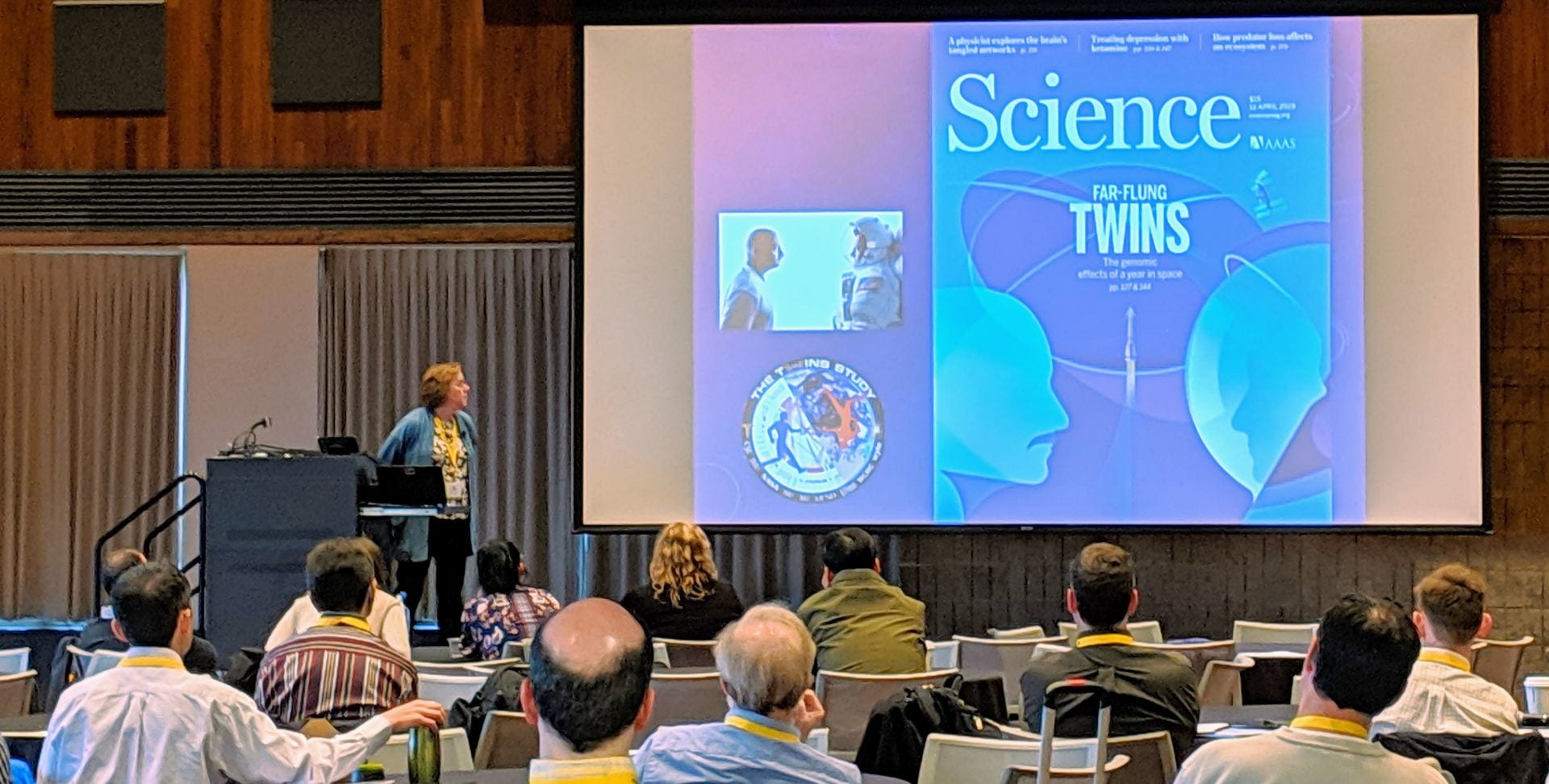 Martha Vitaterna, PhD, research professor and deputy director of Northwestern’s Center for Sleep and Circadian Biology, provided an overview of a landmark study that she and fellow collaborator Fred Turek, PhD, Charles & Emma Morrison Professor, conducted in partnership with NASA’s Human Research Program. The goal of the research was to determine the effect of space flight on gut microbiota, the thousands of species of bacteria that live inside the stomach and intestines. The yearling investigation tested the gut bacteria of astronaut Scott Kelly during a space mission against his identical twin brother, retired astronaut Mark Kelly who served as the experiment’s baseline. The study found that two major categories of bacteria in Scott Kelly’s gut microbiome had shifted during spaceflight, but the diversity of bacteria in his microbiome remained unchanged. Northwestern’s CAMI facility was instrumental in producing the whole body fat measurements for the experiment. This was one of several studies by the team examining how spaceflight affects the human body, including changes in gene expression, bone density, immune system responses and telomere dynamics. 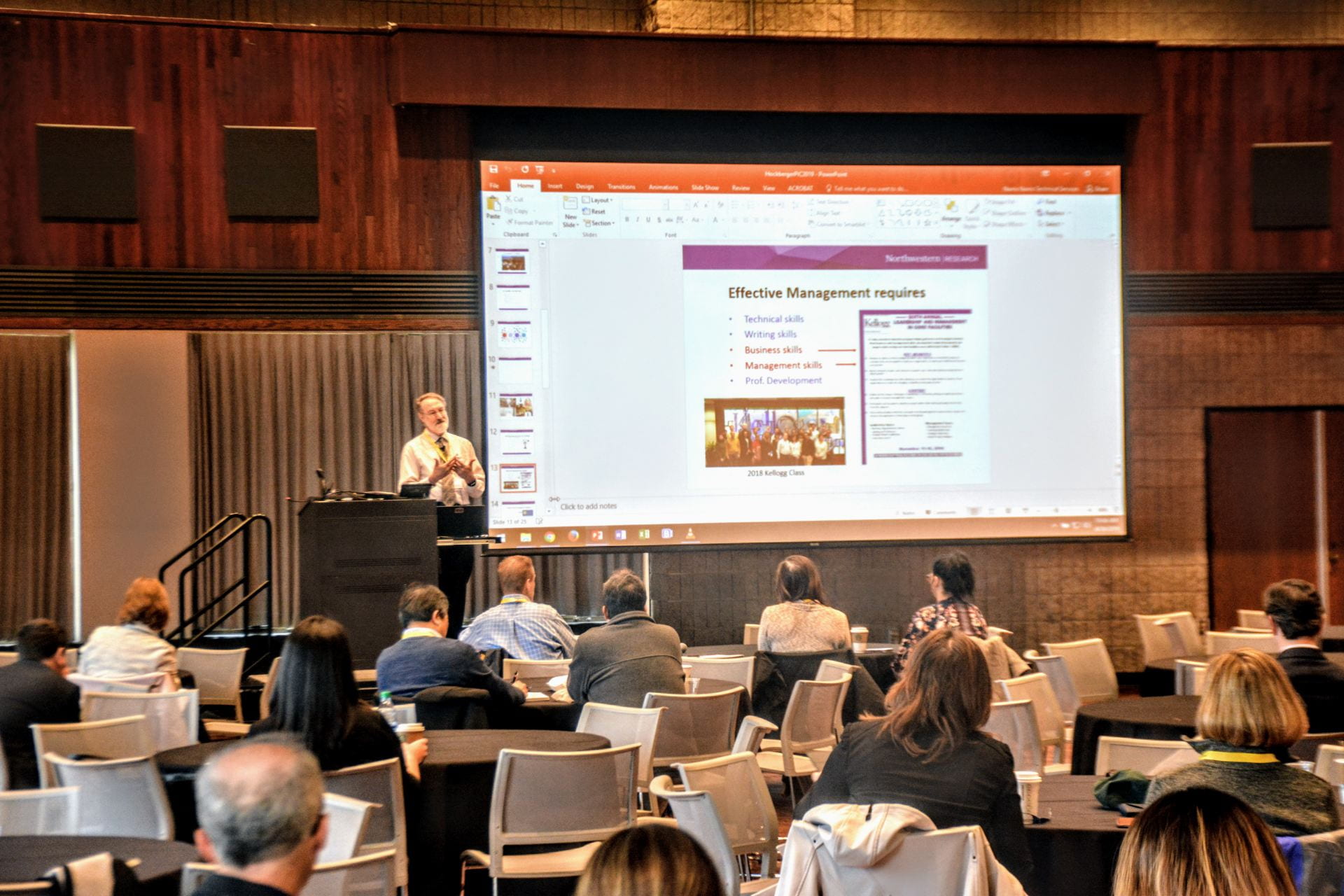 A leading advocate for the professionalization of cores as a scientific field Philip Hockberger, PhD, associate vice president for research at Northwestern, discussed his efforts to create a new professional path for those looking to make a difference in managing core facilities.

According to Hockberger, the U.S. government invests approximately $30 billion per year in research (core) facilities. 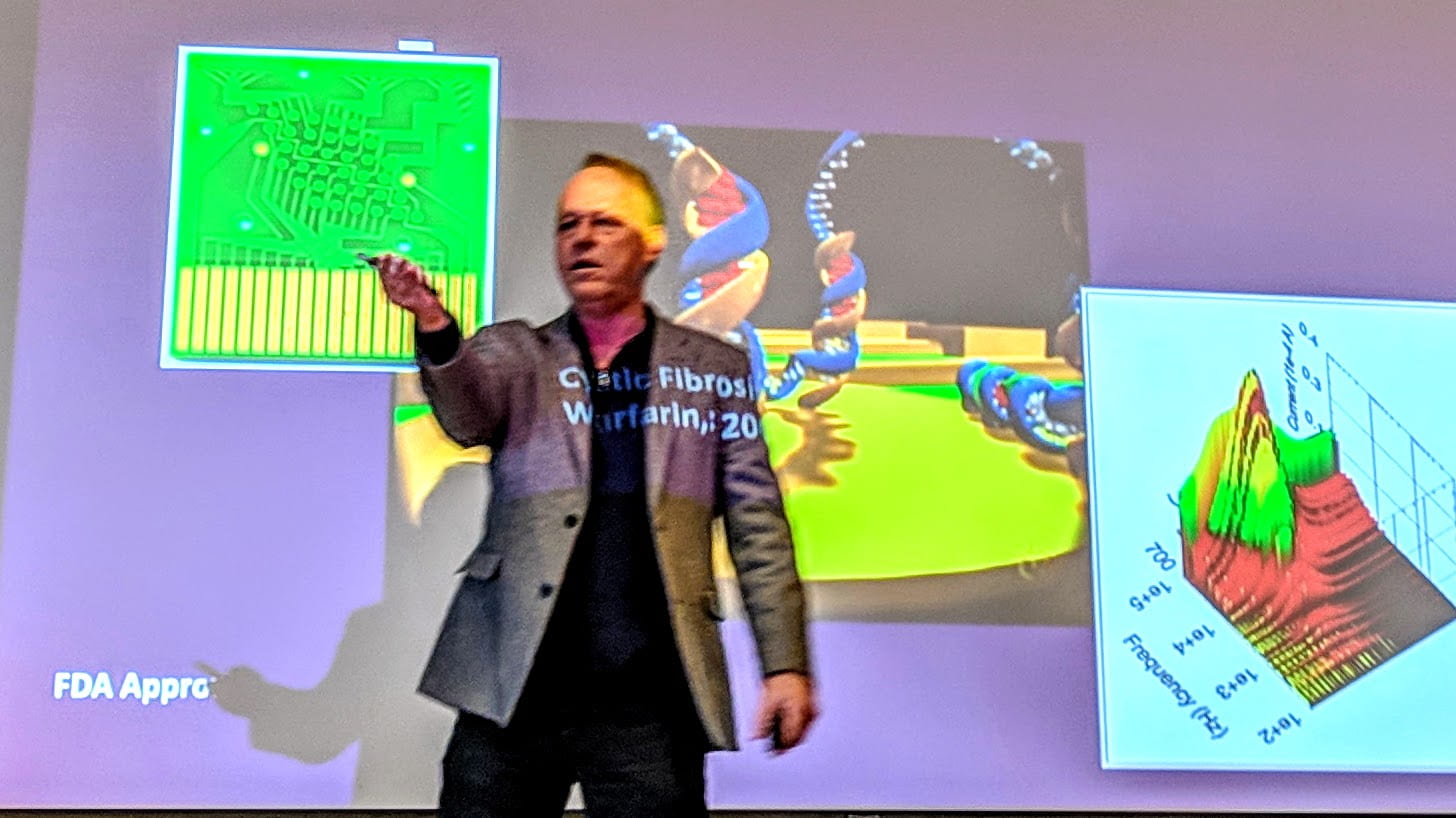 The program wrapped up with a no-holds-barred primer on commercialization given by veteran entrepreneur Thomas Meade, PhD, the Eileen M. Foell Professor of Cancer Research and Professor of Chemistry, Molecular Biosciences, Neurobiology, Biomedical Engineering, and Radiology. Meade cautioned attendees to consider the risks before diving in because the odds of a biotech startup actually making it to an exit strategy is low— about 1 in 103, he says.

“Don’t do it. It’s a black hole,” joked Meade. “It’s deeper than you’re ever going to see in. And once you’re in, you’re never going to get out.”
He also refuted some common misconceptions, such as believing the process will make academics rich, or an assumption that scientists understand business and marketing. Typically, the process doesn’t make people wealthy. He also strongly encouraged would-be entrepreneurs to listen to the experts and seek outside counsel from business people. Meade talked from experience having started five companies based on translational discoveries he made in the lab.

Some of his breakthroughs, such as an electronic DNA biosensor that instantly detects the presence of diseases like cystic fibrosis and also has broad applications for agriculture, succeeded brilliantly. Others, including one startup he spent more than 6,000 hours over 10 years developing, are unlikely ever to reap any benefits. Nevertheless, he admitted to being bit by the entrepreneurial bug and notes that several of his post docs and graduate students have become very wealthy from the process.