U of I System, DPI and IIN gifted another $10 million!

University of Illinois Board of Trustees Chairman Edwards and his wife, Anne, give $10 Million to the University of Illinois, half of which will go to U of I System’s Discovery Partners Institute (DPI) and Illinois Innovation Network (IIN), adding momentum to the recently announced Gov. J.B. Pritzker’s $500 Million pledge to support the development of DPI 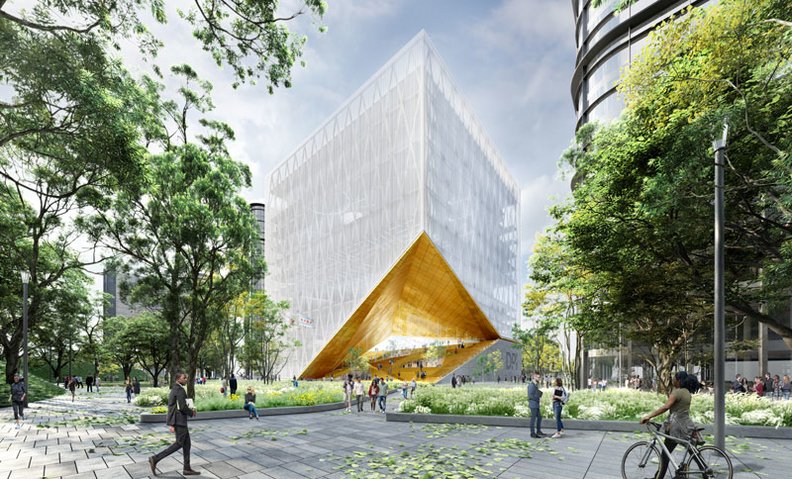 A rendering of plans for a development along the South Branch of the Chicago River. Courtesy: Related Midwest. Source: Crain’s Chicago Business.

Both, Gov. J.B. Pritzker’s and the Edwards’ donations, along with the vision of how this stimulus is expected to impact U of I System, Chicago and the state are discussed in a Press Release from the Governor’s Office, published in Illinois News, “Gov. Pritzker Highlights Vision for Innovation and Economic Development with $500 Million Commitment to IIN and DPI” (see below).

Quoting Gov. J.B. Pritzker, “With this announcement today of Discovery Partners Institute and the Illinois Innovation Network, we are launching a new era for Chicago as an extraordinary focal point for an unparalleled tech workforce and research and development that will attract talent to our state from around the world, strengthening Illinois’ long-term economic vitality for generations to come. Illinois’ nexus of partnerships, innovation hubs, public and private universities, national laboratories, and international research programs is the foundation for a technology ecosystem that will rival any location in the world. And through the Illinois Innovation Network, DPI’s success will radiate across the state to 15 hubs from Chicago to Rockford to Peoria to Edwardsville. We are investing in workforce development, innovation and R&D all across our state.”

All three CBC universities, Northwestern, The University of Chicago and of course UIC, are among a total of twelve US-based and international universities and research institutes in partnership with DPI. The CBC has already hosted a few entrepreneurially-oriented CBC Accelerator Network (CBCAN) meetings at DPI. These events bring together industry experts, university tech transfer officers, researchers and others from the local and extended biomedical ecosystem with discoveries that may have commercial potential. The CBC is proud to be an active participant of the current DPI activities and we are looking forward to the exciting future developments!

Gov. Pritzker Highlights Vision for Innovation and Economic Development with $500 Million Commitment to IIN and DPI

Technology hub will support 48,000 new economy jobs, with $19 billion economic impact over the next 10 years; University of Illinois Board of Trustees Chairman Edwards and his wife, Anne also give $10 Million to University, half of which will go to IIN and DPI

Gov. J.B. Pritzker speaks at the future site of the Discovery Partners Institute, one of 15 state hubs of a University of Illinois-led public-private research institute network that will receive portions of $500 million in state infrastructure spending. Source: Illinois.gov.

Chicago — Highlighting his dynamic, long-term vision for economic development built on state-of-the-art technology, robust higher education and private partnerships, Gov. JB Pritzker on Wednesday announced that the State of Illinois is moving forward with $500 million in capital funding for the University of Illinois System’s Illinois Innovation Network (IIN) and Discovery Partners Institute (DPI) – a network of research and innovation hubs that will serve as a magnet for technology and talent.

“With this announcement today of Discovery Partners Institute and the Illinois Innovation Network, we are launching a new era for Chicago as an extraordinary focal point for an unparalleled tech workforce and research and development that will attract talent to our state from around the world, strengthening Illinois’ long-term economic vitality for generations to come,” said Governor JB Pritzker. “Illinois’ nexus of partnerships, innovation hubs, public and private universities, national laboratories, and international research programs is the foundation for a technology ecosystem that will rival any location in the world. And through the Illinois Innovation Network, DPI’s success will radiate across the state to 15 hubs from Chicago to Rockford to Peoria to Edwardsville. We are investing in workforce development, innovation and R&D all across our state.”

IIN and DPI are focused on preparing students and workers to step into lucrative, high-tech jobs, and increasing funding for the applied research and development that will create more of those life-changing careers. At the same time, IIN and DPI will emphasize inclusivity to increase the diversity of the state’s new economy workforce. Together, IIN and DPI are designed to develop, attract and retain talent, providing a hive of technological research and innovation that combines the power of students, faculty and companies to propel Illinois toward a future as a leading tech destination.

The funding committed by Gov. Pritzker will allow DPI and other hubs of the IIN across the state to begin architectural design work while attracting more private funding from both corporate partnerships and philanthropy. Under Gov. Pritzker’s leadership, the university dramatically accelerated its private fundraising, and has raised roughly $230 million to date from private donors.

Edwards, who is a graduate of the university, said dedicating half of that gift to IIN and DPI is a demonstration of his belief in their academic impact and economic potential.

“My wife Anne and I are thrilled to make this $10 million gift to DPI and IIN and to the university that transformed both of our lives,” Edwards said. “Like Governor Pritzker, I hope and believe that today’s events will catalyze even more support for pioneering initiatives that have the potential to truly reinvent our economy here in Chicago and across Illinois.”

“Chicago is thrilled to be taking this important next step with DPI, Governor Pritzker and Related Midwest in developing a state-of-the-art innovation hub that will drive cutting-edge technology advancements and propel growth and opportunity throughout our city and entire region,” said Mayor Lori E. Lightfoot. “DPI’s decision to anchor in Chicago is a vote of confidence in the talent of our people and strength of our diverse, local economy, and we look forward to collaborating with them on our shared goals of developing inclusive, long-term economic growth through an array of investments that will create jobs, start companies, and help shape the future of our city for generations to come.”

“With Gov. Pritzker’s leadership and commitment, and the support and encouragement of Chicago Mayor Lori Lightfoot, DPI is now poised to become the major hub of innovation, technology development, and job creation that we all envision for Chicago, the State of Illinois, and the world. This investment by the state adds real fuel to the economic engines of DPI and IIN,” said University of Illinois System President Tim Killeen. “We are grateful for Gov. Pritzker’s vision, and his belief in what we are determined to create – an ever-more vibrant innovation ecosystem serving all the people of our state.”

Together, IIN and DPI are pioneering a new model for driving economic vitality in the state. With its planned headquarters in Related Midwest’s The 78, a 62-acre mixed-use development in downtown Chicago, DPI will be a key piece of a dynamic commercial and residential space along the Chicago River.

“Our vision for The 78 is to create Chicago’s next great neighborhood,” said Curt Bailey, president of Related Midwest. “With a dynamic Phase 1 plan that includes DPI as its centerpiece, we’re showing how a 21st-century neighborhood, created from the ground-up and connected to so many culturally-significant areas, will bring new opportunities to all of Chicago. DPI’s organizational model will drive long-term innovation across critical growth industries and draw corporate tenants, entrepreneurs and venture capitalists — from across Chicago and around the globe — to The 78, where they will find top talent, groundbreaking research, and new technologies that support future expansion.”

From that location, DPI will serve as a thriving nexus for students, university faculty and Illinois corporations. The IIN hubs will provide entry to communities across the state for ideas and innovations generated at DPI, while also leveraging the strengths of Illinois’ public universities to ignite the state’s economy.

DPI has already begun to work closely with Chicago’s business leaders, particularly through its relationship with P33 and its CEO, Brad Henderson. P33 is a nonprofit created to strengthen ties between Chicago and the global technology and innovation community.

“This marks an exciting moment for our region and the coming together of months of collaboration and partnership,” Henderson said. “DPI will become a hive of technology activity connecting Chicagoland’s world class strengths in data science and advanced analytics to our strong industry base – a huge unlock for our region. P33 is proud and honored to continue our partnership with DPI to solve some of the most pressing challenges facing our city, our state and beyond.”

Since their creation, the development of IIN and DPI has also been picking up speed through the building of a leadership team, the beginning of the first programs at DPI’s downtown Chicago headquarters, and early initiatives at IIN hubs across the state. Some of those steps include:

In January, William C. Jackson was named to lead DPI. He is a former president at Johnson Controls and an alumnus of the University of Illinois at Urbana-Champaign, and brings deep ties to industry. He is focused on building industry partnerships, as well as identifying research interests with university partners to attract federal and private funding; working to add internships, research experiences, and workshops for both university and K-12 students and advancing plans for the center’s permanent headquarters.

IIN’s group of hubs – including DPI – now numbers 15, linking every public university in the state and U of I College of Medicine locations in Peoria and Rockford, to reach every corner of the state. Projects planned at the IIN hubs will apply technology to address challenges and create new opportunities related to agriculture and food systems, manufacturing, transportation, health and wellness, the environment, and entrepreneurship.

Partnerships have also been established with 12 universities and research institutes in the United States and abroad, including Argonne National Laboratory, Cardiff University, The Hebrew University of Jerusalem, all three U of I System universities, Illinois Institute of Technology, the University of Chicago, MS Ramaiah Medical College, Northwestern University, National Taiwan University and Tel Aviv University.

IIN and DPI were announced in 2017. They are led by the U of I System and its three universities in Urbana-Champaign, Chicago and Springfield.

Adapted (with modifications) from Illinois News, published February 12, 2020, by Office of the Governor.

▸ Don, Anne Edwards donate $10 million to U of I
Gift is largest in history by a U of I trustee
U of I System’s Press release, published February 12, 2020.

▸ The 78 lands a big tenant draw with DPI
In an era of companies moving entire headquarters to gain an edge in recruiting top tech talent, Related Midwest can now point to the prospect of setting up shop next to a training hub for one of the country’s top engineering schools.
By Danny Ecker for Crain’s Chicago Business, published February 12, 2020.