The CBC is pleased to share with its community an article published yesterday in Crain’s Chicago Business, “Life sciences hub planned for Fulton Market” (see below). The article, jointly written by top Crain’s writers Danny Ecker, Stephanie Goldberg and John Pletz addresses recent developments in the Fulton Market area of Chicago, which is rapidly becoming a “hot” corporate hub, following the moving in of giant companies such as Google and McDonald’s.

The goal of the just-announced initiative to create Fulton Labs – a 400,000-square-foot lab and office building – is to help solve one of the city’s problems, namely, the retaining of talent and biotech spinoffs which “often move to markets like Boston and San Francisco to scale their businesses because they have facilities to help them mature.”

Being developed by Trammell Crow, Fulton Labs are exactly designed “to address a dire shortage of high-quality local lab space” in Chicago.

Two CBC affiliates, Northwestern University Associate Vice President for Research Philip Hockberger and Chicago life sciences entrepreneur John Flavin, provide their take on the current state of the biotech in Chicago and comment on the promise the Fulton Labs can be expected to bring to the space-starved local entrepreneurs.

To further quote from the article: ‘“Now is the time for a project like this, and Fulton Market is the place for it to exist. It connects all the dots that have increasingly been bubbling up in Chicago,” Flavin said, referring to university initiatives—like the University of Chicago’s Polsky Center, which he led until 2018—to promote innovation and mentor startups by students and faculty.’

Indeed, the availability of new lab space comes at a perfect timing that coincides with three very active CBC programs which are working across the three CBC institutions to support early stage translational initiatives.

Initiated at the onset of the CBC Phase 2 in 2017, the CBC Accelerator Network (CBCAN) program has created a vibrant community, regularly bringing together researchers who have made discoveries with commercial potential, with university tech transfer officers, industry experts and others from the local and extended biomedical ecosystem. The aim of the CBCAN is to provide early commercial guidance that universities and university-based researchers need in order to move promising discoveries into and forward in the pipeline towards commercialization.

Inaugurated in 2018, CBC Accelerator Award program supports research leading to the development of therapeutics at the early stages of translation. The award is intended to enable the initial steps toward commercialization of intriguing basic research discoveries with significant translational potential.

Last but not least, established in 2019, CBC Entrepreneurial Fellows Award program identifies and supports the professional development of academic researchers who are keen to develop the skills and experiences needed to move translational projects from a university lab toward commercialization and potentially into a Chicago-based biotech start-up.

Needless to say, the CBC is playing a vital role in supporting the development of local talent and in “creating” Chicago-based entrepreneurs, soon to be ready to take off their discoveries to the next – startup level. Who knows, but they may become the first tenants of the Fulton Labs slated to open its doors towards the end of 2021!

Developer Trammell Crow aims to build a 400,000-square-foot lab and office building in the trendy corridor, hoping it will help nurture biotech and pharmaceutical companies born in Chicago’s backyard. 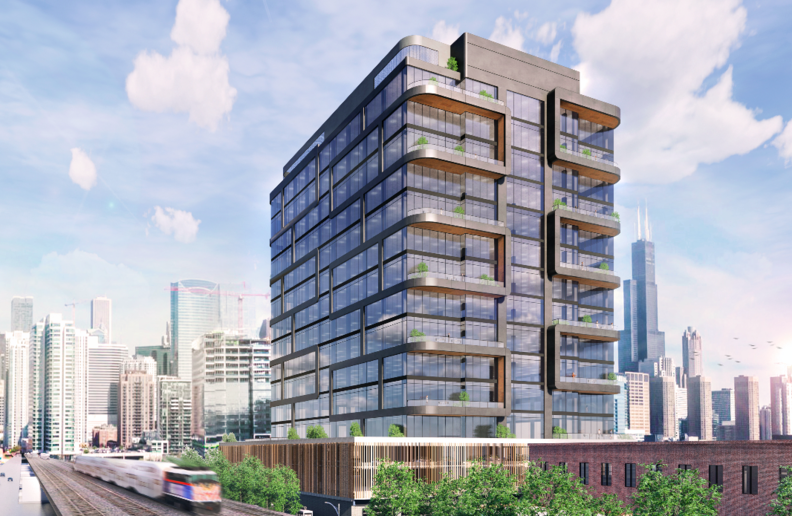 A Texas developer is making a bold bet on the future of Chicago’s life sciences sector, planning what it hopes will become a major hub for the industry in the city’s hottest corporate neighborhood.

In an ambitious move meant to address a dire shortage of high-quality local lab space, Dallas-based Trammell Crow today announced its vision for Fulton Labs, a 400,000-square-foot life sciences laboratory and office building it wants to build at 400 N. Aberdeen St. in the former meatpacking district.

The project has the potential not only to draw biotechnology and pharmaceutical companies to Fulton Market, the gritty-turned-trendy home of corporate giants like Google and McDonald’s, but it may also mark a critical step toward solving a cultivation problem in the city: Homegrown life sciences companies often move to markets like Boston and San Francisco to scale their businesses because they have facilities to help them mature.

Experts say that trend is stifling growth that should be happening here in a sector that is a top economic-development priority for both the city and state.

“We’re trying to strengthen the supply side of what is a really strong life sciences cluster here in Chicago,” said Trammell Crow Managing Director Grady Hamilton, who sees the potential for Fulton Labs to draw from ventures spun out of university research groups as well as large pharmaceutical companies headquartered in the Chicago area.

The idea for the project came from “the confluence of seeing some of these (companies) that might have been considering office and lab space and learned the space wasn’t adequate for their needs, so they were leaving our market,” he said. “We thought this would be a great place to do it and a great product to deliver.”

The developer, which has two other office projects under construction farther west in Fulton Market, submitted plans in September for a large office and retail building along Kinzie Street between Aberdeen and May streets. That followed more than a year’s work planning Fulton Labs in partnership with Chicago life sciences entrepreneur John Flavin, who will help oversee the design and marketing over the building.

Trammell Crow is rolling the dice on a type of property that most developers have avoided, despite overwhelming demand. Life sciences facilities are expensive to build, requiring special ventilation, electrical and safety systems to accommodate chemical reactions, and extra security to protect highly valuable intellectual property. They’re risky, because what may be suitable for one tenant may require a massive overhaul for a future one after a lease expires.

It’s led to a chicken-and-egg conundrum that has lingered while innovative startups have skipped town for more nurturing markets: Developers aren’t building expensive lab space on the chance that there won’t be enough companies to consistently fill their rent rolls, yet companies are leaving because they don’t have the necessary space.

“The only way to satisfy the demand is building (space), not talking about it,” Trammell Crow Principal Johnny Carlson said. That’s why the developer aims to break ground on Fulton Labs this spring on speculation, or without any tenants signed. It still needs City Council approval, but Carlson said financing for the project is lined up and the goal is to open to tenants by the end of next year.

The 16-story building would be “designed to the highest possible laboratory standards by some of the world’s most respected life sciences architects, lab designers and engineers,” the company said in a statement.

Floors would be column-free and laid out to accommodate lab space as well as offices, and the building would include a slew of amenities such as a rooftop lounge and patio. One floor would be designated as a shared lab and office space to help lure startups.

“Fulton Labs will be a place where researchers and tech innovators alike will want and deserve to be,” CBRE Senior Vice President Dan Lyne said in a statement. The real estate services firm is marketing the project to potential users.

Northwestern University Associate Vice President for Research Philip Hockberger said Trammell Crow’s project would be “great in that it adds to the life sciences inventory in Chicago,” but there’s a lot more work to be done to rival the biotech ecosystems found in more mature markets like Boston’s Kendall Square. “It doesn’t achieve the long-term goal of putting us on the map. It’s not a substitute for the development of a district, with multiple buildings for people to live, work and play that will rival what’s on the coasts.”

Fulton Labs would be among the few life sciences projects that have made it from the planning stage to reality.The University Tech Park at the Illinois Institute of Technology and the 24-acre Illinois Science & Technology Park in Skokie are the top-tier lab spaces available today anywhere near the pool of university-based life sciences companies. Another new space opened recently at Rosalind Franklin University in North Chicago. And Flavin is also involved in the University of Chicago’s partnership with developer Wexford Science & Technology, which plans to build a facility in Hyde Park with lab space.

Prolific Chicago developer Sterling Bay—which help set off the transformation of Fulton Market when it lured Google to the neighborhood in 2015—recently hired the biomedical industry veteran who helped run Illinois Tech’s lab space to head up its new life sciences division. The developer in 2018 bought a 119,000-square-foot medical research facility in Lincoln Park from Lurie Children’s Hospital with an eye toward cultivating life sciences companies there.

Flavin said Fulton Labs enables Chicago to offer companies “a very attractive alternative (to the coasts), with all the same attributes you would find in other locations, like top-notch research institutions.”

Flavin plans to leverage his network of large drugmakers, medical technology companies and universities, as well as venture-capital firms, to support the project, which would include a biotech company incubator. “When you build a platform like this, it’s not just about bricks and mortar,” he added. “It’s about who is going be there, what they’re doing and how it’s programmed.”

As Fulton Market transitions from its industrial past, it’s “uniquely suited to attract talent that already exists here … and draw talent from other parts of the country,” Flavin said.

“Now is the time for a project like this, and Fulton Market is the place for it to exist. It connects all the dots that have increasingly been bubbling up in Chicago,” Flavin said, referring to university initiatives—like the University of Chicago’s Polsky Center, which he led until 2018—to promote innovation and mentor startups by students and faculty.