Gov. J.B. Pritzker to release $500 million in state capital funds towards the development of the University of Illinois’ Discovery Partners Institute (DPI), a potential game-changer for Chicago tech

The CBC is delighted to share with its community an article published today in Crain’s Chicago Business, “‘Once-in-a-generation’ South Loop project gets $500M boost from Pritzker” (see below). The article, written by Greg Hinz (For: On Politics) announced Gov. J.B. Pritzker’s long-awaited decision to “release $500 million in state capital funds for the budding Discovery Partners Institute in the 78 real estate project on the Near South Side.”

In a joint press conference with Mayor Lori Lightfoot, Gov. J.B. Pritzker made a formal announcement to “clear the way for construction of 500,000 square foot headquarters for DPI.” The new building is to include laboratory space, classrooms and an “immersion theater” for data visualization for thousands of expected future users of the facilities. The work is expected to begin later this year.

To quote Gov. J.B. Pritzker, “This puts Illinois at the epicenter of world commerce.” Indeed, Boston Consulting Group project that ‘DPI should create 48,000 “new economy” jobs over the next decade, 27,000 support jobs and help 23,000 people get better jobs.’

Some even hope that the development, which is part of the Related Midwest-sponsored 62-acre development along the South Branch of the Chicago River between Roosevelt Road and Chinatown, may over time become a Chicago-based equivalent of Kendall Square in Boston.

The availability of new laboratory and office space comes at a perfect time to perhaps become the future home to “graduates” of the three CBC programs which support early stage translational initiatives at the CBC partnering institutions.

The CBC Accelerator Network (CBCAN) program, initiated in late 2017, is now a solid establishment in Chicago, regularly bringing together researchers with discoveries having commercial potential with university tech transfer officers, industry and pharma experts and others from the local and extended biomedical ecosystem. In fact, several recent CBCAN meetings took place at the current DPI location at 200 South Wacker Drive.

The CBC Accelerator Award program, inaugurated in 2018, provides funding for biomedical research focused on the development of a therapeutic or an associated biomarker or diagnostic. The award is intended to enable the initial steps toward commercialization of intriguing basic research discoveries with significant translational potential.

Last but not least, established in 2019, the CBC Entrepreneurial Fellows Award program identifies and supports the professional development of academic researchers who are keen to develop the skills and experiences needed to move translational projects from a university lab toward commercialization and potentially into a Chicago-based biotech start-up.

Needless to say, the CBC is playing a vital role in supporting the development of local talent and in “creating” Chicago-based entrepreneurs, soon to be ready to take off their discoveries to the next – startup level. The present boost for the DPI development highly increases a likelihood of not only attracting new but also retaining local talent cultivated by the CBC in Chicago.

The governor now says he will release the long-awaited funding that will kick-start development of the University of Illinois’ Discovery Partners Institute, a project insiders tout as a game-changer for Chicago tech—and for Related Midwest’s neighborhood-in-the-making, the 78. 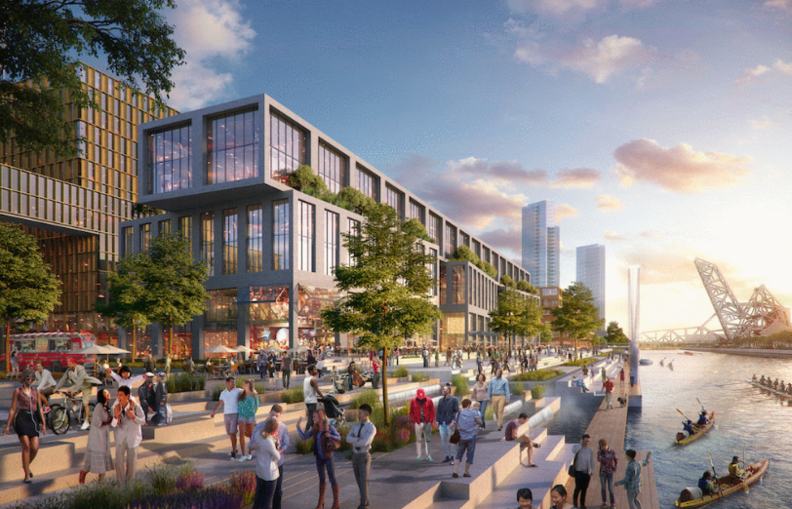 An architect’s rendering of the campus on the South Branch of the Chicago River. Courtesy: Related Midwest. Source: Crain’s Chicago Business.

In a huge boost for Chicago’s tech industry and for development of the South Loop, Gov. J.B. Pritzker has decided to release $500 million in state capital funds for the budding Discovery Partners Institute in the 78 real estate project on the Near South Side.

The formal announcement, formally announced in a press conference featuring Pritzker and Mayor Lori Lightfoot, clears the way for construction of 500,000 square foot headquarters for DPI, including classroom and lab space for thousands of teachers and students expected to use the research facility.

Officials at Related Midwest, which is donating land for the DPI project, said the action provides a critical catalytic spark to attract other tenants to the firm’s 62-acre development along the South Branch of the Chicago River between Roosevelt Road and Chinatown. (See renderings of the plans in the original article.)

The release of the state funds also clears the way for more than $260 million in other high-tech research spending at other campuses around the state, including $85 million for a pharmaceutical and cancer research facility at the University of Illinois at Chicago and $100 million for a big data hub and other buildings at the University of Illinois at Urbana-Champaign.

The Legislature originally approved the $500 million for DPI a year and a half ago at the request of then-Gov. Bruce Rauner and then-Mayor Rahm Emanuel. Funds were re-approved last year, but Pritzker had balked at spending them, saying he wanted proof that DPI’s parent, the University of Illinois, would be able to match that spending in private capital.

Pritzker says he now is satisfied.

“When I got here, there was hardly any matching money,” Pritzker said in an interview. But now, $230 million in hard commitments have been made by various government units and private companies, and the state expenditure should clear the way for “at least” another $270 million.

“This puts Illinois at the epicenter of world commerce,” aid Pritzker, who was in the venture capital business before running for office. “It’s going to create an awful lot of jobs and upskilling”—a projected 1,100 within two years and 15,000 within five years.

Actually, a report prepared for DPI by Boston Consulting Group says the facility, which boosters say they hope will emulate Kendall Square in Boston, could generate even bigger figures, saying DPI should create 48,000 “new economy” jobs over the next decade, 27,000 support jobs and help 23,000 people get better jobs.

University of Illinois President Timothy Killeen said construction of DPI’s first building, along the 1400 block of South Wells, should begin this year, with the facility to include 500,000 square feet of laboratory and other space, classrooms, and an “immersion theater” be used for data visualization.

“This is a once-in-a-generation opportunity,” Killeen said. “This is what big land grant colleges (such as U of I) were created to do. It’s the expansion of our mission into today’s economy.”

Equally peppy are Mayor Lori Lightfoot’s administration, which is eager to show it can produce good jobs here, and Related Midwest, which has waited and waited for its anchor tenant.

“DPI has catalytic potential for the Chicago economy,” said Deputy Mayor Samir Mayekar in an interview. “It will be university tech and students collected in what will become an innovation district.”

At the same time, Mayekar underlined, DPI has agreed to strike deals with local community groups, schools and others to insure that jobs and training are spread to needy neighborhood residents, not just young adults moving in from elsewhere.

Related Midwest President Curt Bailey described the announcement as “a seminal moment” for his development, which also will benefit from a somewhat controversial tax-increment financing subsidy approved in Emanuel’s final days.

Bailey said he now expects to move ahead with phase one of his development, with six buildings including a million square feet of office space, a hotel and 400 apartments built by 2024, along with a riverwalk. Construction of a new el stop will come later. Related is donating land for the DPI facility under terms of a recently signed letter of intent.

According to the state, the DPI facility will get $235 million of the $500 million in state funds, with the remainder going to other schools that are part of the state’s Illinois Innovation Network. The private funds—the university expects to announce a big donor later today—likely will be distributed in roughly the same proportion upstate and downstate.

Though Pritzker said private fundraising has stepped up, at least $224 million of the $500 million is coming from state schools in different forms, with UIC, for instance, donating $37 million in bond proceeds, $23 million in “indirect cost recovery,” $18 million in philanthropic gifts and $15 million in clinical revenue.

Killeen described the 500,000-square-foot structure as “the first,” noting that similar research complexes in other cities have grown quickly.

▸ The 78 lands a big tenant draw with DPI
In an era of companies moving entire headquarters to gain an edge in recruiting top tech talent, Related Midwest can now point to the prospect of setting up shop next to a training hub for one of the country’s top engineering schools.
By Danny Ecker for Crain’s Chicago Business, published February 12, 2020.