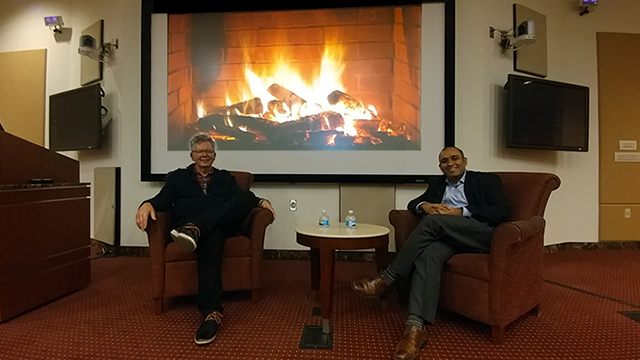 With a roaring fire (albeit virtual) to enhance the ambiance of Northwestern’s Canning Auditorium, CBC hosted its final CBCAN event for 2018, a ‘fireside chat’ with Constellation Pharmaceuticals CEO, Jigar Raythatha. Jigar engaged the audience with candid and insightful reflections on his 20-year career in biotech, culminating with his most recent experience in taking the Cambridge company public earlier this year. The conversation was moderated by CBC Executive Director, Jim Audia, with whom Jigar has worked in a variety of contexts, and consisted of questions initially from Audia and later from the audience as a whole. Raythatha conveyed his thoughts on creating a positive company culture, ‘how to be a biotech CEO in 4 easy steps’, and finding mentorship from a variety of sources, including his 9 year-old daughter. He shared his thoughts on the uniqueness of Cambridge in the biotech sector and on our efforts here in the Chicago area, along with some of the assets that we possess to make us successful in our own endeavors to create a thriving biotech hub. As always, CBCAN concluded with more networking and casual conversation over food and drink, making for a noteworthy and enjoyable evening. See photos and a video from the event below.

After concluding 2018 on such a high note, we are confident that CBCAN has become an important fixture within the Chicago biomedical community and an integral component of CBC’s Phase 2 programming. We are excited as we enter into 2019 with an exciting slate of CBCAN events to be announced soon. Please stay tuned.