“Frontiers in Molecular Imaging: From Promise to Practice” 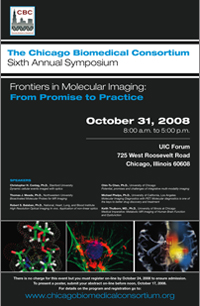 Approximately 200 people attended the 2008 Symposium. Along with informative presentations, opportunities for networking at this daylong event were offered during lunch and at a closing reception. Twenty-four posters prepared by researchers at Northwestern University, University of Illinois at Chicago, and The University of Chicago were presented during the poster session. Two were selected as best poster and the authors received an iPod.