The seminar is a part of the Loop Connections Seminar Series organized by the CBC Scholars. The series aims to build strong connections across the CBC universities by providing a platform for fostering novel collaborative efforts.

Humankind’s invention of beer, which occurred about seven thousand years ago, is an extremely successful example of bioengineering. In this system, yeast cells are coerced into transforming plant carbohydrates to ethanol, ultimately resulting in the production of a refreshing and mildly intoxicating beverage.

Today, we continue to modify biological systems to generate useful and marketable products, including drugs like insulin or household items like nylon. This subject – the engineering of biological systems – was the focus of the spring quarter’s “Loop Connections” Seminar Series, which was organized by the Chicago Biological Consortium (CBC) Scholars and took place on May 29th at Northwestern University. 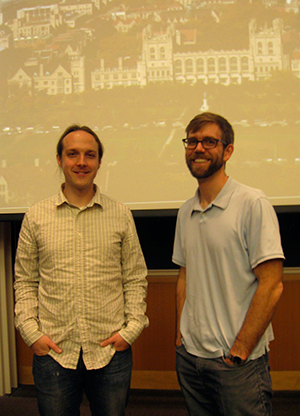 This seminar featured the work of two bioengineers, Northwestern University’s Michael Jewett (right) and University of Chicago’s Jared Lewis. Their talks highlighted the challenges inherent in coercing biological entities, such as yeast or bacterial cells, into mass-producing single molecular products. These challenges are, in part, based on the conflicting goals of the cells and the researchers.

For example, imagine that a researcher aims to produce isobutanol, a potential new biofuel, using a bacterial system. Since the goal of the bacterial cells is to preserve its species, it is not necessarily willing to expend most of its energy producing isobutanol, a toxic substance. Due to this ‘tug of war’ between the human researcher and cellular system, biological engineering can be confounding, costly, and slow.

One potential solution to this dilemma involves using a system called ‘cell-free biology.’ In this system, the bacterial cytoplasm is isolated from the other cellular compartments, resulting in a stable catalytic ensemble that can be used to synthesize molecules in the absence of intact cells. Critically, with this system, it is no longer necessary for the researcher to compete with the objectives of the cells. This results in a system that is fast, cost effective, and high yielding. It also provides, in Jewett’s words, “an unprecedented freedom of design.”

This freedom of design could be extremely beneficial for Lewis’ research program. Lewis is interested in combining the advantages of two very different kinds of catalysts: metallic catalysts and biological enzymes. Metallic catalysts are highly reactive, but are poorly selective and also can be toxic to cells. By contrast, biological catalysts, or enzymes, thrive in an intracellular environment and are highly selective. Lewis asked, “could we take synthetic metallic catalysts, put them in proteins, and then have hybrid constructs [with] the reactivity of the metal catalyst and the selectivity of an enzyme?”

Embedding a metallic catalyst inside a protein to produce one of these so-called “artificial metalloenzymes” involves multiple steps. First, a “scaffold” protein, which contains a modified or “unnatural” amino acid, is generated using an evolvable bacterial system. Second, a metallic cofactor is synthesized, designed specifically to attach to the unnatural amino acid in the scaffold protein. Finally, using a reaction that is known as ‘click chemistry,’ the cofactor and the protein are linked. In this procedure, only the generation of the scaffold protein is performed within a cellular system – the rest involves organic synthesis.

Lewis wondered whether it was possible for the cell itself to perform all these challenging steps. In other words, could an artificial “organometallic” amino acid – an unnatural amino acid that contains the metallic catalyst – be directly incorporated into the scaffold protein during bacterial protein synthesis? Unfortunately, organometallic amino acids “are very different from tyrosine,” and Lewis and his team have been unable to convince the cells to incorporate them into growing peptides. This is likely due to the very large, unwieldy shapes and enhanced reactivity of these unnatural organometallic amino acids.

This is where collaboration could be particularly fruitful. Following the talks, Lewis and Jewett discussed the possibility of using Jewett’s advances in cell-free protein synthesis to facilitate the incorporation of organometallic amino acids during the production of Lewis’ artificial metalloenzymes. This was an extremely exciting conversation for the CBC scholars, as the mission of the “Loop Connections” Seminar Series is to foster cross-institutional communication and collaboration. The scholars were thrilled to see collaboration in action, and were happy to receive positive feedback from the faculty speakers about this mission. “Chicago is an amazing city for many reasons, including our academic community.” Lewis emphasized. “Anything to bring that together is awesome.”