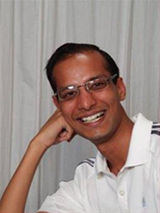 My research focuses on identifying peptide pheromones secreted by Streptococcus pyogenes which are involved in regulating virulence and biofilm formation by this pathogen. Success will establish the foundation for our understanding of the role that quorum sensing plays in virulence gene regulation in GAS, a phenomenon that has never before been explored for this bacterial pathogen. The long term implication of his research is to develop anti-quorum sensing molecules which can act as novel antibiotics.