Kudos to CBC for its Infrastructure support!

Through the CBC Infrastructure Award program, in 2014, Northwestern acquired a GATAN K2 Summit Camera, a high-resolution electron detector for its $5M JEOL 3200SF Cryo-Electron Microscope (CryoEM). The camera was installed in March 2015 and has been used by investigators from NU and other universities. The instrumentation is located in the NU CryoEM core and Dr. Alfonso Mondragon is the facility Director. The purchase of the K2 camera was critical in the recruitment of an assistant professor to NU. Four CBC Postdoctoral Research grants have been awarded to use this technology and one CBC Catalyst team is using this technology towards visualizing spliceosomal intermediates. Research facilitated by this technology was crucial for 2 faculty members in obtaining grants from NIH and the American Cancer Institute. In addition, 13 grant applications based on research involving the instrumentation have been submitted. Since the installation of the K2 camera, usage of the JEOL 3200SF has increased, having a large economic impact on the NU CryoEM core facility.

Recently, the NU CryoEM facility has been featured on the front page of the Northwestern Research News in an article titled: “Structural Biology Facility Helping Reveal Life’s Building Blocks.” The article graciously credits CBC support and its positive impact on Chicago universities.

To quote from the article: “It’s an exciting time in structural biology and with support from the University and entities like the Chicago Biomedical Consortium we will continue to grow,” says Mondragón, referencing the effort launched by the Searle Funds at the Chicago Community Trust to spur collaboration among scientists at Northwestern, the University of Chicago, and the University of Illinois at Chicago. “Both EM and crystallography generate enormous amounts of raw data and Northwestern’s ability to process that information will keep us at the forefront of the field for years to come.” 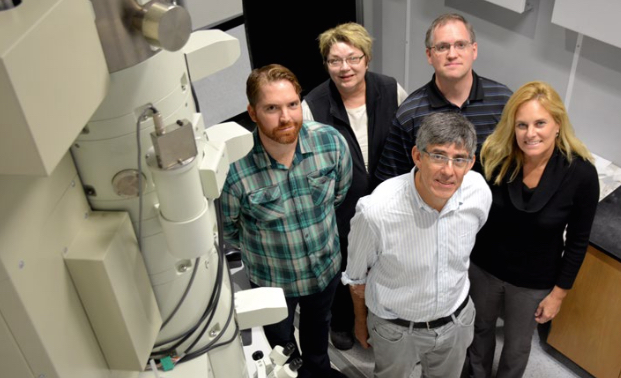