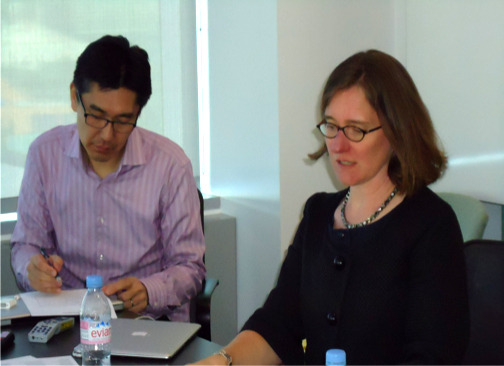 The CBC Exploratory Workshops Program is intended to stimulate new Catalyst grant submissions, NIH Program Project Grants, and eventually Lever Awards associated with large, multi-investigator NIH funding opportunities such as P50 and U54 grants. Faculty from at least 2 of the CBC institutions need to collaborate in submitting an application and organizing the workshop. Workshop groups need to include faculty from all three CBC universities and the CBC envisions the workshops to consist of 5-20 faculty members. Emphasis should be put on novel research ideas, a multidisciplinary approach and new research teams. The CBC will award up to $2000 for expenses associated with these half- or full-day workshops and CBC staff will help organize approved workshops. Six application deadlines, approximately 2 months apart, will occur each year.

PHOTO: Lucy Godley (right), the UChicago organizer of a daylong workshop focusing on the biology of 5-hmC, summarizing the day’s discussions and ways to move forward with future collaborations. (Photo: CBC)