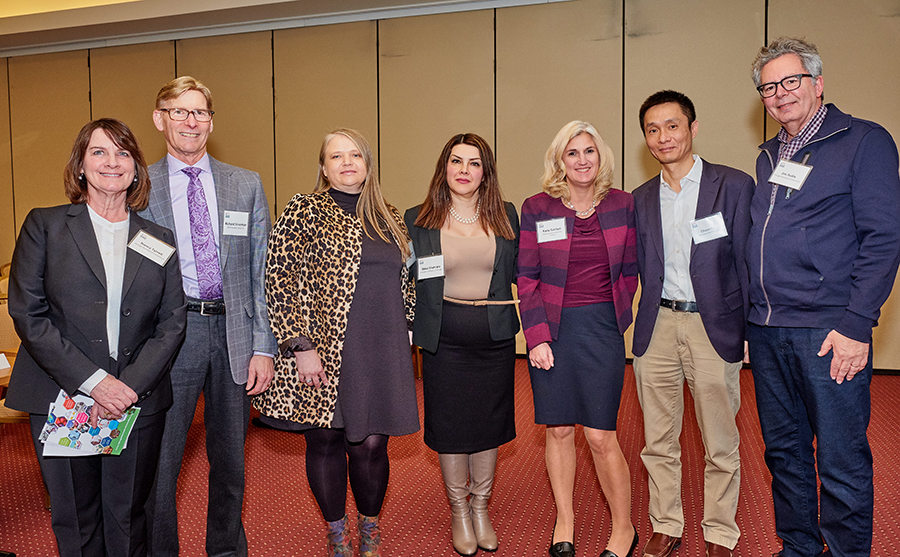 On February 8, 2018, CBCAN hosted the second group of Live Presentations for the CBC’s newest award program, the Accelerator Award, which is in the midst of its first round. This newest offering from CBC, which is primarily focused on translational research, has drawn great interest from the community, with 32 Letters of Intent (LOIs) submitted covering a broad range of translational efforts toward therapeutics and/or their associated diagnostics or biomarkers.

From these initial 32 submissions, nine promising proposals were advanced to the live CBCAN presentation stage of the process after initial triage review by the Accelerator Review Board (ARB). The first four LOIs were presented at the CBCAN event on February 1, with the remaining five at the February 8 event. The five LOIs presented at the February 8 CBCAN came from Yulia Komarova (UIC), Rick Silverman (NU), Shiva Shahrara (UIC), Karla Satchell (NU), and Chuan He (UChicago) and described novel approaches toward therapeutics for age-related macular degeneration, various cancer types, rheumatoid arthritis as well as a novel cancer diagnostic. Not only was the range of projects highly diverse, but also the speakers themselves represented a breadth of institutions, genders and nationalities that make up our greater Chicago community and the CBC.

Jim Audia, CBC Executive Director, and Nancy Tyrrell, CBC Associate Director for Translational Activities, again moderated the February 8 event, which was broadly attended by members of the Chicago biomedical community despite the threat of an impending snow storm.

The presentations were on point and the discussion was lively, with feedback offered directly to the investigators as well as summarized to help guide in the preparation of full proposals. Invitations for the full proposals will be extended on March 1.